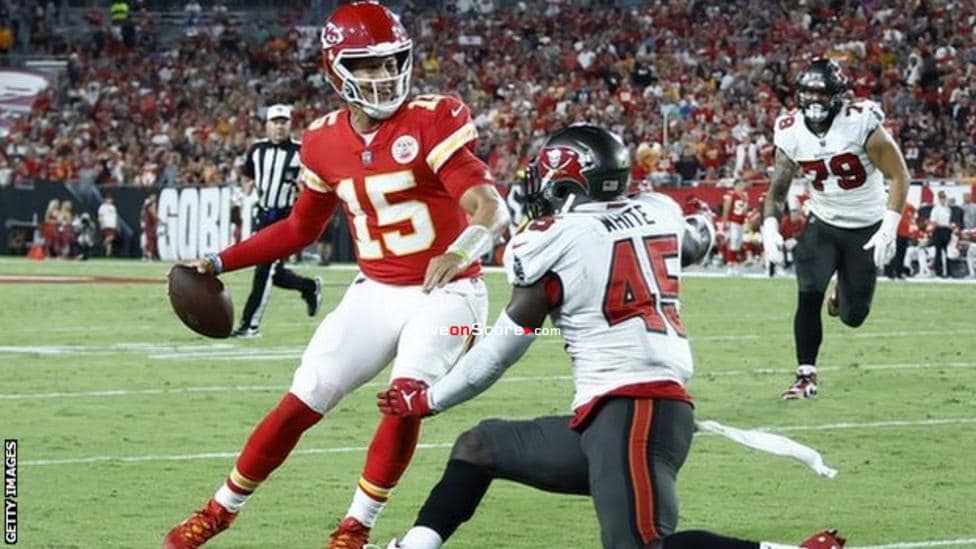 Patrick Mahomes and the Kansas City Chiefs gained some manner of revenge on Tom Brady and the Tampa Bay Buccaneers with an electric display in their Super Bowl rematch.

Mahomes was nullified on his previous visit to Raymond James Stadium for Super Bowl LV in 2021, but this time he led his side to a 41-31 victory.

Elsewhere, there was high drama as the NFL hit London, while Aaron Rodgers hit another career milestone as the Green Bay Packers held off the New England Patriots at Lambeau Field.

Brady’s Buccaneers became the first team to win a Super Bowl on home turf when their defence dominated Mahomes in February 2021, but it was a different story from the very start of their rematch.

After suffering an upset against the Colts in week three, Mahomes came out all guns blazing and produced some of his very best form with unorthodox moments of magic, some elusive running and laser throws.

That Super Bowl defeat was one of just two in Mahomes’ 77 starts where he failed to lead a touchdown drive – it took him just 46 seconds this time around as he sliced a Bucs defence that had only allowed 27 points in their first three games.

Rodgers joined an exclusive NFL club as he became the fifth quarterback in league history to throw 500 touchdown passes – but his night was almost ruined by Patriots rookie QB Bailey Zappe, who was making his NFL debut.

Rodgers threw his second touchdown to hit Romeo Doubs and tie the game against the Pats and third-choice QB Zappe – who made a promising debut when he came off the bench to replace Brian Hoyer, who was himself playing in place of injured starter Mac Jones.

Patriots head coach Bill Belichick saw Zappe keep pace with Rodgers, who eventually had to settle for overtime before leading a drive for Mason Crosby to kick them to a 27-24 victory as time expired.

Green Bay will make the journey to London next week as they become the 32nd and final team to play a game outside the United States with their fixture against the New York Giants at Tottenham.

The 100th NFL game to be played outside of the USA had a fitting end to it at a deafening Tottenham Hotspur Stadium as two smacks of the goalposts decided the Minnesota Vikings’ 28-25 victory over the New Orleans Saints.

The game burst into life in the fourth quarter with touchdowns, field goals, multiple lead changes and then the dreaded ‘double doink’ – NFL parlance for a kick bouncing off the uprights twice and failing to drop.

That’s exactly what happened to Saints kicked Wil Lutz as he attempted a 61-yarder to force overtime but saw the ball bounce off the post, then the crossbar and then in almost slow motion just tumble down the wrong side of the target.