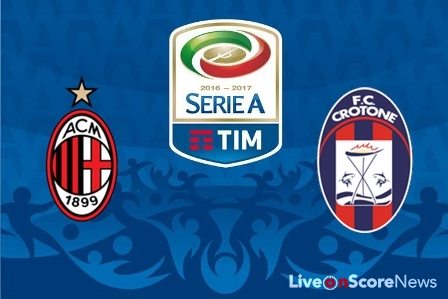 AC Milan vs Crotone-Preview and Prediction

The game provides a difficult challenge for the Calabrian club who are at least no longer on their own at the bottom of the table, joined by Palermo. Nicola will hope his players can repeat some of the heroics that allowed them to keep Inter scoreless until the 84th minute here less than a month ago. Building on last week’s draw against Sampdoria, Crotone will need a near perfect showing to threaten Vincenzo Montella’s in-form Milan.

Having built momentum in the last few weeks, scoring eight goals in the last three games, Montella will expect a strong and sound Rossoneri showing at home. Milan look to continue their run of positive results, and they seem to have discovered a psychological balance. Their performances have demonstrated a newfound intensity and confidence under Montella this season. Even at this stage, the Milan boss will have conveyed the importance of every match to his players. Legendary Italian tactician Arrigo Sacchi referred to Milan as a team ‘with no identity’ this week, but the Rossoneri won’t mind too much considering their run of eight wins and two draws in the last 11 rounds.

Nicola will field a 4-3-3 formation spearheaded by striker Diego Facinelli (on loan from Sassuolo) and former Juventus attacker Raffaele Palladino on the left flank. In 14 games the Rossoblu have managed only 11 goals and a lone victory over Chievo.

Visiting San Siro against a hungry Milan squad and already hanging in the relegation zone, Crotone would be happy to escape the weekend with one point. In Week 12 the Rossoblu faced neighbors Inter at San Siro and played an organized and tactical match, but were eventually undone in the final minutes, allowing three goals. Should Nicola and his players manage to improve on that performance and squeeze a goal or two on the counter, perhaps they can come away with something more than expected.

Milan will be without star striker Carlos Bacca and creative midfielder Giacomo Bonaventura, as Montella looks poised to side his usual 4-3-3. Gianluca Lapadula will fill Carlos Bacca’s absence as the lone striker, with M’baye Niang and Suso playing as wide attackers. Also absent are Mati Fernandez, Davide Calabria, Leonel Vangioni and Riccardo Montolivo. Mario Pasalic, on loan from Chelsea, is the favourite to step in for Jack Bonaventura.

With all the other teams in the top five matched up against each other, Rossoneri fans will have an eye on the table as they look to gain ground on Juventus and Roma. Facing a Crotone side with only one win thus far, this poses a chance for Milan to close the gap.

Keep an eye on: Suso (Milan) – The in form Spanish winger who possesses both a creative and finishing touch will look to create havoc down the right wing. Suso has scored four goals in the last three matches, and under Montella he has improved as a flank defender as well.

Stat fact: Although this is Crotone’s first Serie A match against Milan, the two sides met each other last year in the Coppa Italia. That tie ended 1-1 after 90 minutes, as the Rossoneri eventually ran out 3-1 winners in extra time.

Top tip: Milan haven’t kept a clean sheet in three rounds and should break that run.

Bayer Leverkusen vs Freiburg-Preview and Prediction