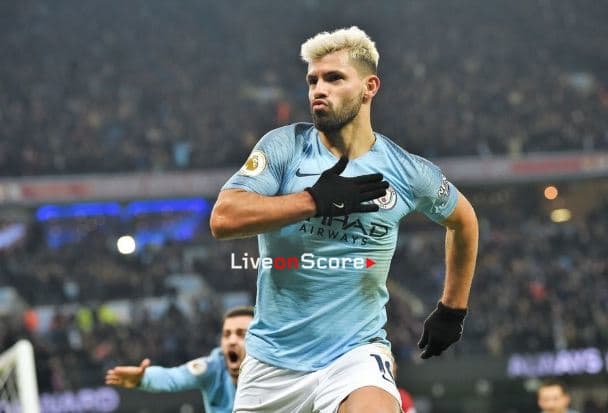 City take on Brighton looking to make it to the final of the competition for the first time since 2011.

And Pep Guardiola says Aguero, who came off in discomfort 12 minutes into the second half of last weekend’s win at Fulham, is close to full fitness and will travel with the rest of the squad.

“He is almost fit,” Guardiola confirmed. “He is travelling.”

One player who definitely won’t be involved at Wembley is Oleksandr Zinchenko.

The Ukrainian limped off with an apparent hamstring problem midway through the first half of the win over Cardiff on Wednesday, and Guardiola says he will be out for 10-12 days.

“I think he said 10-12 days and he will be back, hopefully,” Guardiola said. “I almost decide [who will play at left-back].”

GOLDEN GLOW: KDB and Gabriel Jesus celebrate after the Belgian’s fantastic opener
Highlights
CITY V CARDIFF: EXTENDED HIGHLIGHTS
3 Days
View original post
Meanwhile, Guardiola says reaching an FA Cup final would be a huge personal milestone.
The Catalan has won 24 major trophies during a glittering management career, with he FA Cup the only domestic honour in Spain, Germany or England he is yet to collect.

He is fully focused on adding to City’s five FA Cup wins, and says he is well-versed in the history of the competition having watched many finals as a youngster back in Catalonia.

“When I was young in Catalonia you saw the final of FA Cup more than Premier League games,” he said. “The tradition, the fans, the managers. I cannot deny how nice it would be for me personally.

“The club has won it five times and we want another one, so we will try.”

GATTUSO: "THE JUVE GAME HAS COME AT THE RIGHT TIME"