Premier League leaders Arsenal have to “reset” after losing to PSV Eindhoven and missing the chance to seal top spot in Europa League Group A, says boss Mikel Arteta.

The Gunners only needed a point in the Netherlands to advance to the last 16 next March.

But Joey Veerman’s first-time finish from 16 yards and a header by substitute Luuk de Jong – after a mistake by keeper Aaron Ramsdale on his European debut – meant Arsenal lost in Europe for the first time this season.

“We were nowhere near our level and we know that in Europe it’s very difficult to win. I saw a number of the boys running out of energy because we had to chase the ball so much.

“It’s the end of a long run where we won a lot of games and we have to reset.”

The Gunners need to beat Zurich, who they defeated 2-1 in Switzerland on 8 September, in their final group game next Thursday at Emirates Stadium (20:00 GMT) to guarantee a place in the last 16.

If they fail to win and PSV beat Bodo/Glimt in Norway, Arsenal will face two extra games in the knockout round playoffs, which will also include teams who finished third in their Champions League groups, including Barcelona.

Gunners fail biggest Euro test to date
Arsenal had been pretty much faultless in Europe this season after four wins out of four, including a narrow 1-0 win over PSV at Emirates Stadium last week.

This was their biggest test to date on the continent, yet they were second best as PSV – who included Jarrad Branthwaite, on loan from Everton, in the centre of defence – produced a dominant performance in front of their own fans.

Cody Gakpo and 19-year-old former Paris St-Germain midfielder Xavi Simons caused the Gunners defence all sorts of problems. Gakpo had two goals ruled out for offside and Simons one.

Arsenal were living dangerously and it was no surprise when Veerman swept the hosts ahead before De Jong struck after Ramsdale failed to connect while trying to clear a corner.

By the end, Arsenal finished with substitutes Gabriel Jesus, Bukayo Saka and Thomas Partey on the pitch but they were unable to rescue a point.

“We didn’t get any control,” added Arteta. “We didn’t get the ball in the areas we wanted. We gave so many balls away, which allowed so many transitions.”

Having won eight successive games in all competitions, Arteta’s side have now failed to win their past two.

They remain favourites to finish top of the group, but Arteta now seems unlikely to be in a position to rest key players before the heavyweight London derby at Chelsea on 6 November after a second defeat in 16 games this season. 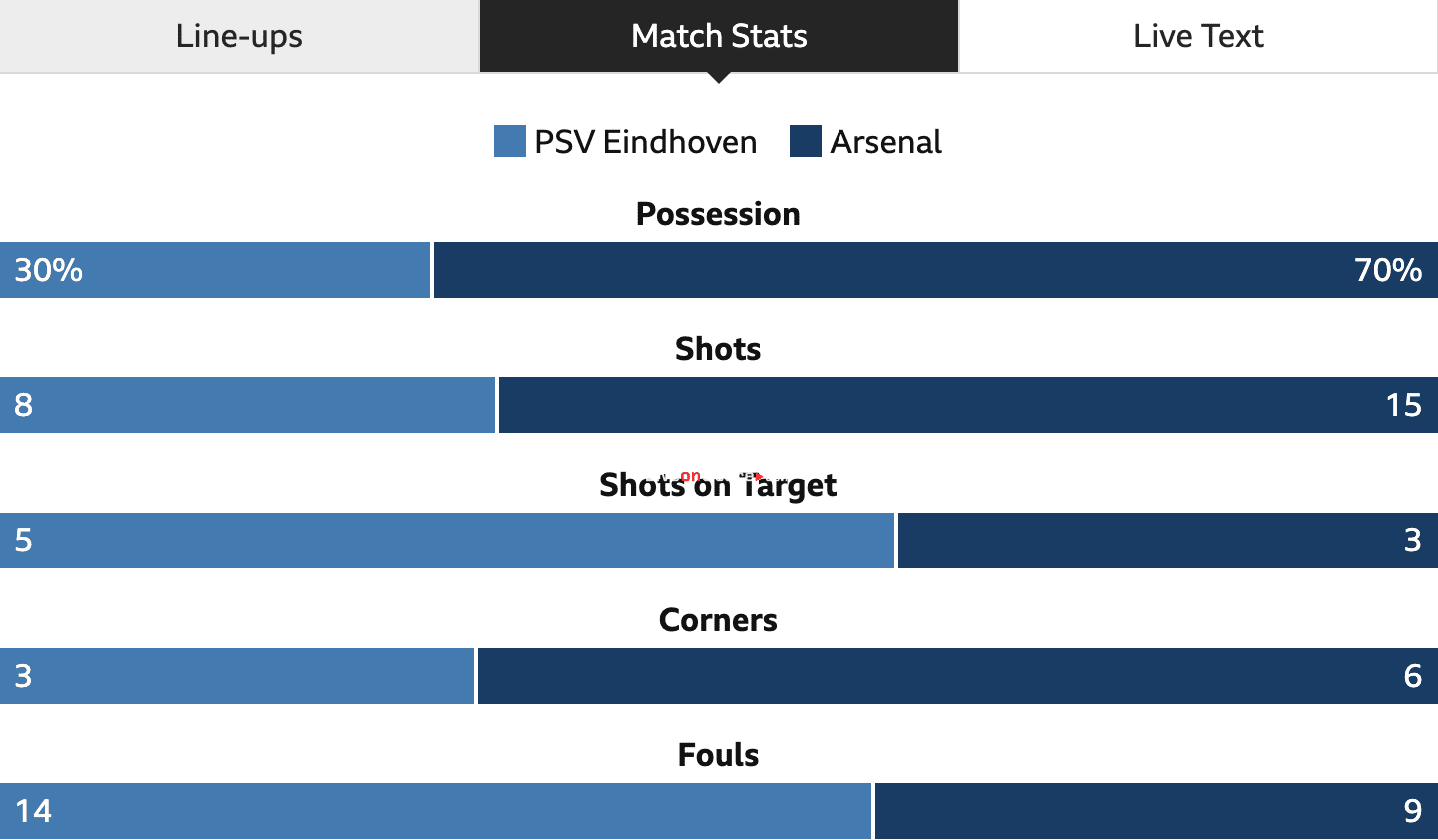