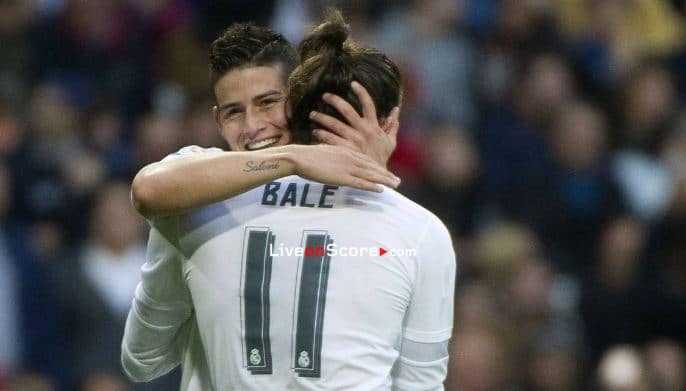 Bale and James show that Zidane was right

There are a lot of reasons for happiness at Real Madrid at present.
Not only are Los Blancos back to the top of the table after beating Real Mallorca 2-0 on Wednesday night, but Thibaut Courtois is on course to win the Zamora Trophy; Sergio Ramos has become the highest-scoring defender in LaLiga history; the partnership between Karim Benzema and Eden Hazard is becoming more telepathic by the game; and Vinicius Junior is beginning to show his potential on a more consistent basis.
More could be added, but in general the review of the four matches played since football got back underway also has shadows. Two, to be exact.
Gareth Bale and James Rodriguez are not quite on the same page when it comes to Zinedine Zidane’s aim of winning LaLiga Santander.
The French coach has given them both chances, but the disconnection that both have seems obvious.
This only proves Zidane right, who would not have minded if both Bale and James departed last summer.
The case of the Welshman is the most frustrating, because his performances are light years away from that of the highest earner in the squad.
Zidane gave Bale a start against Mallorca and he simply tiptoed through the match, barely doing anything of note. For a player of his stature, more is expected.
Wednesday night was just his 20th appearance of the season (13 as a starter) and his numbers are average to say the least: three goals, of which two came in the same game against Villarreal, and two assists for the alleged successor to Cristiano Ronaldo.
Less was expected of James, but the Colombian was not up to the task when he was surprisingly named in the starting XI at the Reale Arena against Real Sociedad.
Slow, out of tune, imprecise, and at no time did he show the quality that we all know he has in his left foot.
James is not even a shadow of the player who marvelled in his first season at Real Madrid, when he scored 17 goals and provided 18 assists in the 2014/15 campaign.
This season he has scored one and made two assists in just 14 games.
In addition, the 28-year-old has made a nuisance of himself at the club and in the dressing room during his last public appearance, in which he claimed his potential move to Atletico Madrid frustrated Los Blancos’ leaders.
After disappointing in San Sebastian, James didn’t feature at home to Mallorca.
Zidane’s desire is to involve as many players as possible in this final stretch of the season, with LaLiga Santander on the line and the ever-seductive Champions League on the horizon.
That’s why James and Bale started against La Real and Mallorca respectively, yet neither responded with performances that would’ve forced the Frenchman’s hand.
Instead, their performances only served to confirm that, once again, Zidane’s diagnosis of both last summer was the right one.