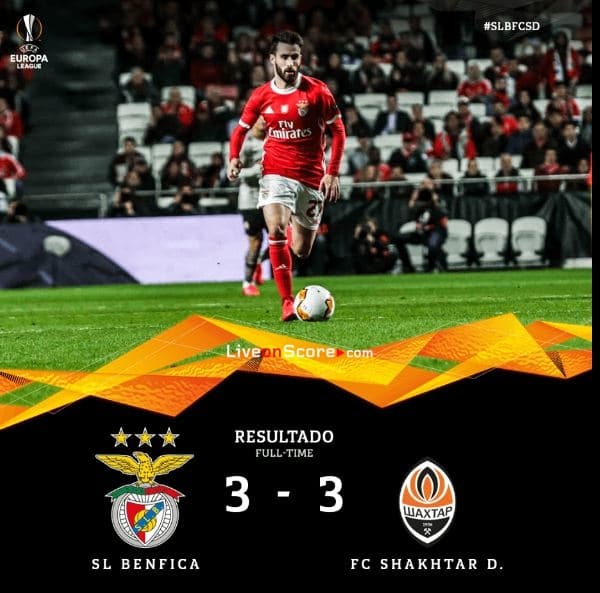 Pizzi (Benfica) received a pass and blasted a beautiful rocket of a shot from just outside the penalty area into the bottom right corner. He was given an ovation. Excellent finish.

It’s an own goal! A pitiful moment for Ruben Dias (Benfica), who tries to clear a cross into the six-yard box but instead sends the ball behind his own keeper. The score is 1:1.

Goal! Pizzi sent in a fine cross from the corner kick. The perfect pass found Ruben Dias (Benfica) and his precise header from around the penalty spot went into the bottom left corner. 2:1.

Goal! Dyego Sousa slips it to Rafa Silva (Benfica) on the edge of the box and he finds the top right corner with a great effort. The score is 3:1.

Taison sends the resulting corner into the box and expertly finds Taras Stepanenko (Shakhtar), who jumps highest and coolly plants a bullet header into the

Goal! Alan Patrick (Shakhtar) fires the rebound into the middle of the goal after the ball breaks to him in the box. The score is 3:3.