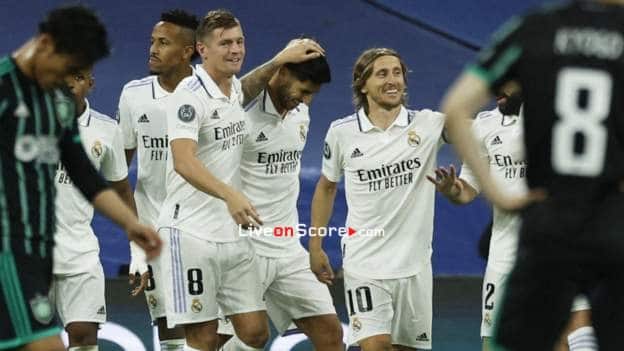 Celtic end group with rout at hands of Real Madrid

The Scottish champions were 2-0 down after 21 minutes as Luka Modric and Rodrygo converted penalties awarded for handball in a brutal opening.

Josip Juranovic then missed a spot-kick for Celtic, and that seemed a distant memory when Marco Asensio, Vinicius Junior, and Federico Valverde made it a rout for the defending champions, even though Jota netted a late free-kick.

Carlo Ancelotti’s side turned on the style in the second half against an increasingly tired and open Celtic, who finish bottom of the section with two points and no wins in their six matches.

Real, though, march on in their quest for a 15th European title having earned the win that guarantees top spot in the group.

With two points from five matches, Celtic knew not even a famous win would extend their stay in Europe, but their fans still travelled in hope, with far more than the official 1,848 allocation seemingly inside the Bernabeu.

The wind was taken out their sails with just four minutes on the clock. In attempting to block Valverde’s tame shot, Moritz Jenz got himself in an awful twist and handled the ball. Modric showed his customary coolness to slot home.

The visitors responded well, fashioning decent openings for Kyogo Furuhashi and Reo Hatate, but neither could trouble Thibaut Courtois in the Real goal.

In fact, the trouble was about to deepen for Celtic. Rodrygo’s strike struck the arm of Matt O’Riley and, although not quite as clearly as the Jenz incident, the outcome was the same. This time Rodrygo converted the penalty.

Vinicius missed an absolute sitter just a minute later as Real threatened to run away with it in the opening half-hour.

Celtic had to get up the pitch and did so to great effect as Hatate robbed the ball to allow Daizan Maeda to put Kyogo through. However Courtois stood tall and was also equal to Hatate’s piledriver from the edge of the box moments later.

Then a huge chance for Celtic. Liel Abada’s surge to the bye-line was checked by a foul by Ferland Mendy. It was a third penalty in a crazy first half, but Courtois foiled the Scottish champions again, diving to his right to push away Juranovic’s spot-kick.

Six minutes after the break, Real put the game beyond whatever little doubt still existed with their third goal. Dani Carvajal ghosted to the bye-line and his sliding cross teed-up Asensio to fire past Joe Hart.

Vinicius added another after stealing ahead of Carl Starfelt to flash in a teasing Valverde cross before Real summoned Ballon D’or winner Karim Benzema from the bench on his return from injury.

The Madridistas were enjoying themselves and Valverde added to that – and piled further pain on the visitors – when he curled a gorgeous effort beyond Hart and into the net.

The Celtic fans could be forgiven for begging for the final whistle, but Jota gave them something to cheer when he curled a wonderful free-kick past Courtois.

It was a lovely moment for the Portuguese winger and gave the visiting supporters something to cheer, but it was no more than a consolation on a night when the gulf between the champions of Scotland and the champions of Europe was laid bare.

Ifs, buts and maybes for wasteful Celtic – analysis
The question heading into this Champions League campaign was whether Celtic’s relentless attacking style would hold up against Europe’s finest. Two points from a possible 18, four goals scored, and 15 conceded in six group games would suggest not.

It is not a lot to show from a group many fans thought they may have had a decent chance of emerging from.

But Celtic have have been competitive for spells of every match and, had they taken a few more of the many chances they created, some of those games may well have had a more positive outcome.

Ifs, buts and maybes. Celtic’s three opponents would point out they also had numerous chances over and above the ones they took, as was the case again in Madrid.

Ange Postecoglou will be heartened that many of his players have not looked out of place in the club’s first group-stage appearance in five years, but this team is still short of the quality they need turn opportunities spurned into points.

Real Madrid coach Carlo Ancelotti: “We wanted to play a good game after our last Champions League game was not so good – we did well.

“Celtic had an opportunity to come back into the game with a penalty but I think we were really focused to play well and win.”

Celtic manager Ange Postecoglou: “I’m disappointed for the players and our supporters that they didn’t get more joy out of the game, but I can’t fault the players’ efforts – I thought they gave it everything.

“We came here and created opportunities that I think other clubs would struggle to. There’s something in that for us, but ultimately we fell short.”

Match stats
Real have won all three of home group stage matches in a Champions League season for the first time since 2015-16, a season in which they went on to win the competition.

Celtic conceded two penalty goals after 20 minutes and 47 seconds against Real Madrid, the earliest a side has ever let in two penalties in a Champions League match.

Real coach Carlo Ancelotti enjoyed his 102nd Champions League win, going level with Sir Alex Ferguson for most wins in the history of the competition by a manager.

At the age of 37 years and 54 days, Modric became the oldest Champions League scorer since Francesco Totti in November 2014 for Roma against CSKA Moscow (38y 59d). 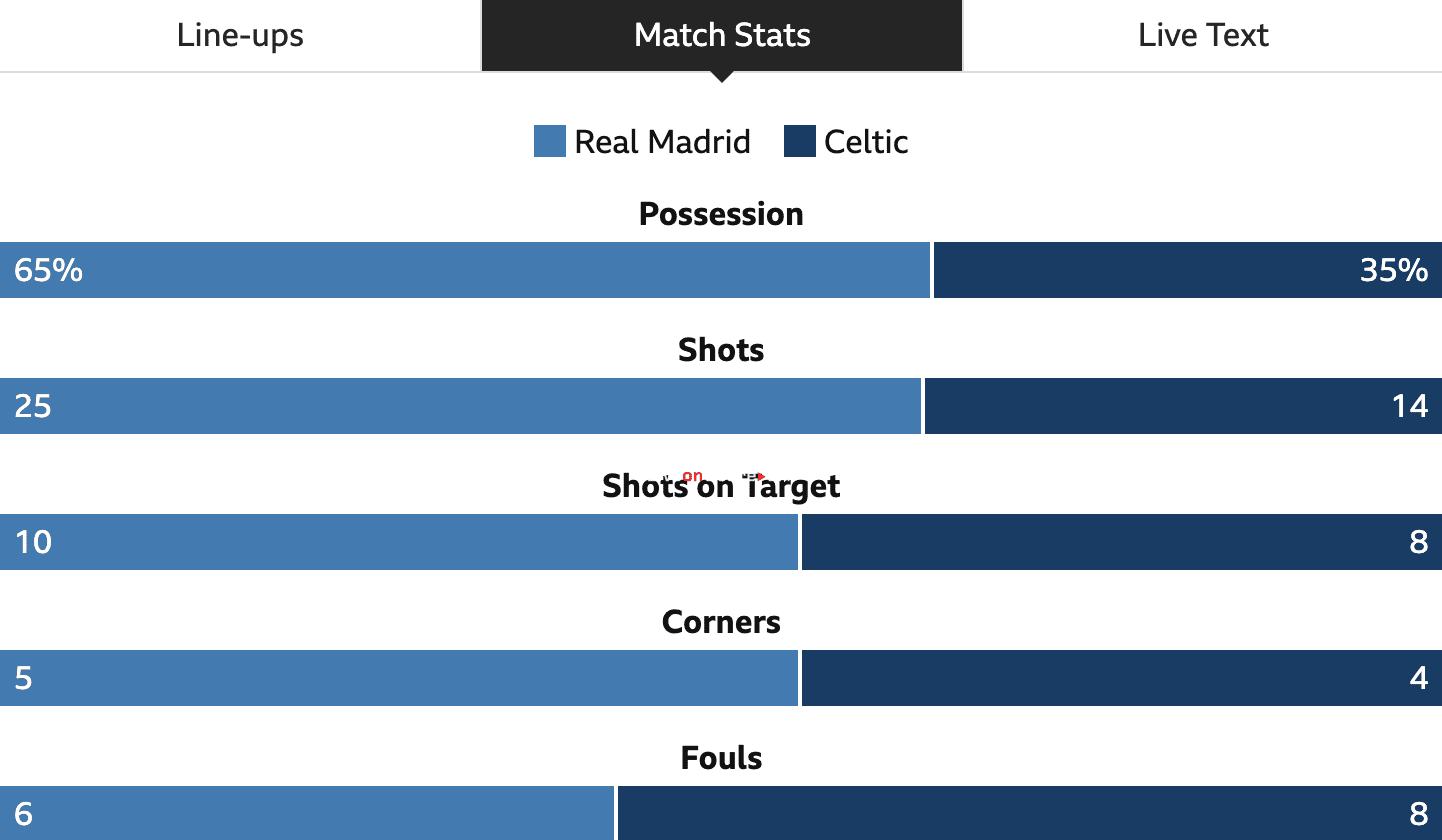