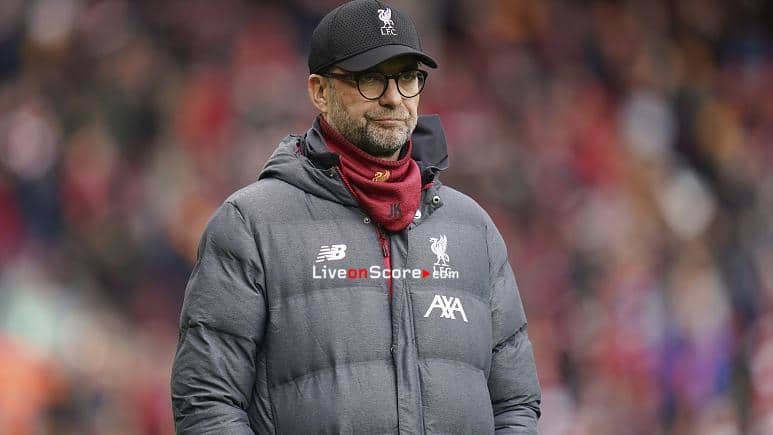 Coronavirus: What could happen if the football season is cancelled?

English football authorities have confirmed professional matches have been suspended until at least 30th April.

All fixtures in the Premier League, Football League, Women’s Super League and Women’s Championship, and all fixtures in Scotland, Wales and Northern Ireland, are currently postponed.

“In this unprecedented situation, we are working closely with our clubs, Government, The FA and EFL and can reassure everyone the health and welfare of players, staff and supporters are our priority,” said Premier League Chief Executive Richard Masters.

The move follows other decisions made by Football governing authorities in France, Italy, and Spain, while UEFA has agreed to delay this summer’s European Championships until 2021.

In a statement to Euronews, English football authorities agreed that “difficult decision will have to be taken to mitigate the economic impact of the current suspension of professional football”.

The Premier league, English Football League and Professional Footballers Association have all stated that the leagues will only recommence “when it is safe and conditions allow”.

But UK football authorities have “collectively supported” UEFA’s decision, which creates space in the calendar to ensure that domestic and European leagues have more chance of being completed.

The Premier League added that this will “maintain the integrity of each competition”.

A number of countries have also expressed the wish to fulfill the remaining fixtures and competitions, but how great will the impact be on the world of sport?

The Italian football federation (FIGC) has admitted that the Serie A season might not finish, and said that they would be discussing several alternatives if games cannot be completed.

When Euronews asked the English Premier League if it was considering the options suggested by the Italian Football Federation, they directed to us to an earlier statement

“Despite the challenges,” it reads, “it is the Premier League’s aim to reschedule the displaced fixtures, including those played by Academy sides, when it is safe to do so.

In this fast-moving environment, further updates will be provided when appropriate.”

Any further measures are currently a matter of speculation.

Will the season be concluded?
One significant move on Thursday saw the Football Association (FA) agree that the current football season should be “extended indefinitely”.

Under current regulations, the English football season “shall terminate not later than 1 June” but the FA Board has allowed for this deadline to be lengthened.

This decision will certainly favour a number of clubs, not just in the UK, but across the continent.

Liverpool lead the Premier League by a huge 25 points and need just 3 more wins in their quest to end a 30-year drought. But this unexpected and unprepared for health crisis has thrown the season’s conclusion into doubt.

Former Liverpool player Jamie Carragher tweeted that the next season of English football “can’t start” until the current season is complete. 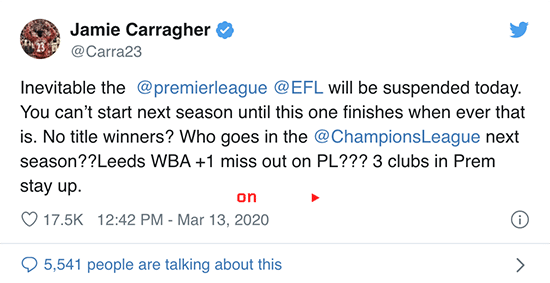 An independent Liverpool FC website This is Anfield has also stated that “the most logical step would be to push back future competitions to accommodate the conclusion of the current campaign”.

The Premier League battles to avoid relegation and clinch European football are much tighter, with AFC Bournemouth currently in the relegation zone on goal difference.

In other European leagues, just two points separate Barcelona and Real Madrid at the top of the Spanish La Liga, while the margin between Juventus and Lazio in Serie A is even smaller.

Meanwhile, in Switzerland, the league title and relegation spot would both be decided on goal difference if the season were to conclude now.

Any decision to conclude the season with or without the usual consequences of titles, promotion, and relegation would likely be met with huge controversy.

Could divisional play-offs be an answer?
The title winner in Italy was previously decided by a play-off in 1964 when Bologna beat Inter Milan after the two sides finished level on points.

The benefit to the leagues would be that this would limit any interruption to future fixtures and seasons, but, again, goes against all the hopes that authorities have of completing the games as intended.

The reality is that there is no obvious model to follow.

Football competition across Europe was last severely affected during and immediately after the Second World War.

The 1939-40 English Football League season was abandoned after just three matches, with Blackpool one point clear at the top of the First Division.

As the country’s focus shifted towards the war effort, regional league competitions were set up as an alternative and no title was awarded.

There have been more recent examples across Europe where trophies have been owner-less.

Juventus were stripped of their 2004-05 Serie A crown due to their involvement in the Calciopoli scandal (where fraudulent relationships between certain teams and certain referees were uncovered) and Olympique Marseille lost their 1992-93 French title over a bribery scandal.

But in both of these examples, the seasons had been concluded and no fixtures were abandoned.

Could the season be declared null and void?
Celtic captain Scott Brown, whose team currently enjoys a 13-point lead in the SPL has said that Scottish football season should finish “as it is” if the season ends prematurely.

In Chile, last season’s Campeonato Nacional football season was suspended in mid-October due to widespread anti-government demonstrations, with six fixtures still to be played.

When Chile’s football authorities voted to conclude the season in November following failed attempts to resume the season, the title was awarded to Club Deportivo Universidad Católica.

Universidad Católica had been leading the league by a comfortable, but not unassailable, 13 points at the time. Moreover, no teams were relegated to the second tier, Primera B, at the end of the season.

Instead, the top division was expanded in 2020 from 16 to 18 teams, with the top two teams from Primera B promoted.

This included second-place Deportivo La Serna, who would have qualified for a promotion playoff had the season been completed, and at the time of suspension, were ahead of third-place Ñublense by just one point.

The idea of expansion would prove an altogether different headache for European football authorities, but there is certainly precedent for ending the season now.

Further meetings will take place next week, as the Premier League looks to formulate a plan to deal with these unprecedented circumstances.

Any decision will focus not just on clubs and players, but also staff, sponsors and supporters.

Premier League: 30 April restart date to be pushed back