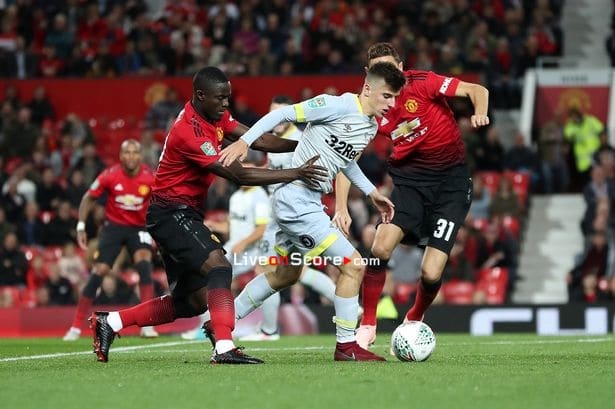 Manchester United will aim to book our place in the Emirates FA Cup quarter-finals for the sixth successive season on Thursday, when we travel to Pride Park to face Derby County.

The Reds drew 1-1 with Everton in the Premier League at the weekend thanks to Bruno Fernandes’s third goal in as many games, and Ole Gunnar Solskjaer’s side will be hoping to stretch our unbeaten run to nine matches in all competitions when we visit our Championship opponents.

We have a proud record in the FA Cup, having won the competition on 12 previous occasions. Our most recent triumph came in 2016, with Wayne Rooney playing a pivotal role in our victory over Crystal Palace in the Wembley final.

Our all-time record goal scorer is expected to line up against the Reds on Thursday following his January move to the Rams.

Ahead of the reunion with our former skipper, here’s everything you need to know about Thursday’s game…

Thursday’s game will be broadcast live in the UK on BT Sport 1. Meanwhile, MUTV will provide exclusive build-up in Match Day Live from 18:40 GMT, followed by live audio commentary of the game itself. There will also be comprehensive online coverage with live updates in both ManUtd.com’s Match Centre and our Official App. Should you miss the match, it will be replayed in full on MUTV from 12:00 GMT and 15:00 GMT on Friday.

WHO IS THE REFEREE?

Craig Pawson will be the man in the middle on Thursday. The 41-year-old has taken charge of two United games this season: the 2-2 draw with Aston Villa, and our 2-0 defeat to Liverpool. Pawson last refereed United in the FA Cup during our fourth-round clash with Arsenal last season, when we beat the Gunners 3-1 at the Emirates Stadium. Ian Hussin and Daniel Robathan will be Pawson’s assistants on Thursday night, while Lee Mason – who oversaw our comprehensive 6-0 win over Tranmere Rovers in the previous round – is the fourth official. This year, all FA Cup games in non-Premier League grounds will be staged without the use of VAR, meaning the officials during our clash against the Rams will not be able to avail of the video technology.

The FA Cup last-16 ties are spread out across four days this week. Arsenal have already secured their place in the quarter finals with a 2-0 victory over Portsmouth on Monday evening. Chelsea and Liverpool meet at Stamford Bridge on Tuesday, while the following night, Tottenham Hotspur against Norwich City is the only other all-Premier League clash of the round. Manchester City travel to Championship outfit Sheffield Wednesday, and Newcastle United, Sheffield United and Leicester City also all face opposition from the second tier.