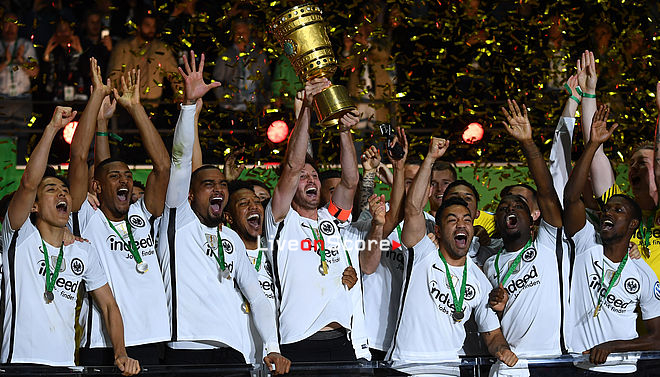 A tremendous performance from Niko Kovac’s troops ensured SGE lifted the trophy for the fifth time after previous triumphs in 1974, 1975, 1981 and 1988. David Abraham and Alex Meier were given the honour of hoisting the trophy into the night sky, with the excellent Rebic receiving the official Man of the Match award. The Eintracht supporters, clad in special DFB Cup final t-shirts, sang throughout the 90 minutes after unfurling a spectacular tifo prior to kick-off.

Kovac named fit-again Rebic and Jonathan de Guzman in his starting XI in Berlin. The Croatia international partnered Kevin-Prince Boateng in attack, with de Guzman slotting into defensive midfield alongside Omar Mascarell. Makoto Hasebe was recalled after missing the Eagles’ final league game of the campaign through suspension, while captain David Abraham was also passed fit to start in defence. 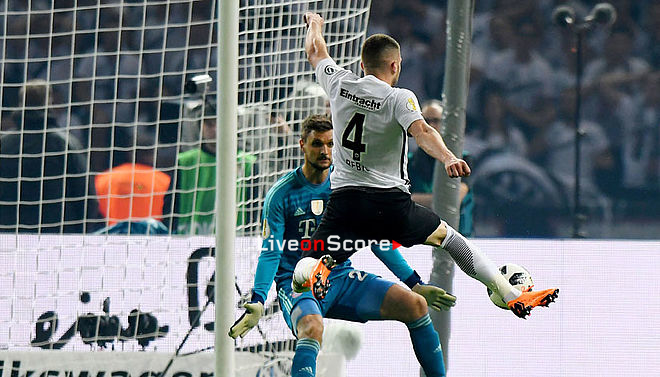 Eintracht started brightly in the German capital but it was Bayern who fashioned the first clear-cut opening of the game, Robert Lewandowski striking the underside of the crossbar with a free-kick from the edge of the penalty area. Undeterred, the Eagles continued to harry their opponents all over the pitch and deservedly took the lead just three minutes later, Boateng’s through-ball releasing Rebic who sent a clinical finish past Sven Ulreich and into the bottom corner. Bayern upped the ante after Rebic’s goal, but Kovac’s troops held firm to take a narrow lead into half-time.

Desperate to fashion a route back into the contest, the Bavarians began the second period with greater intent and restored parity seven minutes after the restart. Joshua Kimmich’s precise cross from the right found Lewandowski, who sent Lukas Hradecky the wrong way to make it 1-1. Sensing blood, Jupp Heynckes’ side poured forward in search of a second goal and only a sensational tackle from Hasebe prevented Corentin Tolisso from putting Bayern ahead for the first time in the match (69’).

SGE continued to threaten on the counterattack, however, and when Rebic was played through on goal by Danny da Costa in the 82nd minute, the 24-year-old beat Ulreich for the second time in the match to put SGE on the brink of a remarkable victory. Hradecky saved well at the feet of Sandro Wagner not long afterwards, before Ulreich was given permission to go upfield for a late Bayern corner. Eintracht managed to clear the danger, allowing Gacinovic to sprint 50 yards and calmly slide the ball into the unguarded net to put the seal on the Eagles’ first DFB Cup triumph in 30 years. 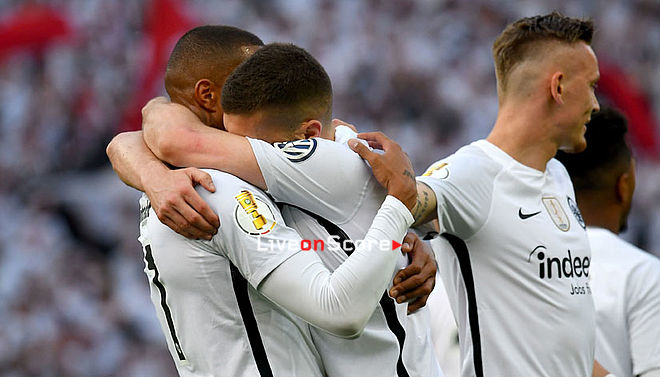 Eintracht were disciplined throughout, limiting Bayern to very few clear-cut chances at the Olympiastadion. Kovac’s side always looked capable of scoring on the counterattack and that’s exactly what they did, making the most of the handful of opportunities that came their way. They only had 23 per cent possession, but the Eagles weren’t to be denied on a truly memorable evening in Berlin.