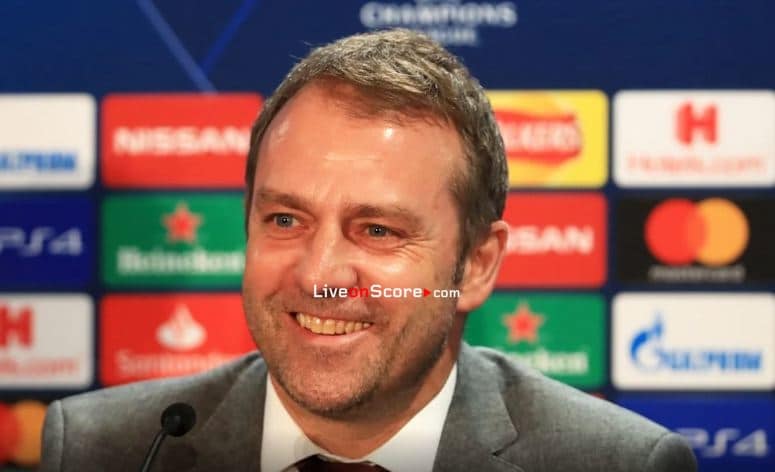 Now it’s getting serious! On Tuesday evening, FC Bayern contest the first leg of their Champions League round of 16 match at Chelsea, where they’ll be looking to put themselves on course for a place among the best eight teams in Europe and take a good result into the return leg at the Allianz Arena on 18 March. Ahead of his first European knockout match as Bayern coach, Hansi Flick fielded questions from the media at the press conference in London on Monday. fcbayern.com rounds up the 55-year-old’s key quotes.

Flick on the knockout clash in London
“I want to win every game, that’s part of my self-image as a coach. We’re preparing the team well for the opposition, which we’ve done very well up to now. We have the first leg in London, the second leg in Munich. It’s important that we send out a signal here.”

Flick on Chelsea’s current form
“We’ve analysed Chelsea, their strengths and weaknesses, and where we see opportunities to turn the game in our favour. But in my opinion, they’re doing very well with the new team they’ve assembled. They’re fourth in the Premier League and are ahead of some teams who you’d expect to be higher up. We’ll do well to go into the game with respect but without fear.”

Flick on chances of winning the Champions League
“The games have to be played first. We have enormous quality in the side, as they’ve proven in many games in recent months. Who knows where the path will take us, but we’re taking it one game at a time – right now the focus is on Chelsea. I hope we’ll be in the quarter-finals after the two legs, then we’ll see what comes.”

Flick on desired results
“There’s no such thing. The game must be played with all our concentration and passion. The team know what to expect. We want to attack with courage and confidence. We’re in form in the second half of the season, so I’m fully confident that the team will deliver.”

Flick on Robert Lewandowski
“Robert is in the form of his life. He’s very confident, he’s super-fit. He’s on a roll at the moment, which we hope he shows in the last 16 against Chelsea. He can lead the team with his effort and contribute by putting the opposition under pressure after we lose possession. Therefore it’s important that he’s positive – and he is at the moment. He applies himself in the team. He also does a very good job defensively and up front, he’s just on fire. I don’t have the statistic about exactly how many goals he’s scored this season in my head now but his record is certainly sensational.”

Gattuso: "I want a positive performance against Barcelona"