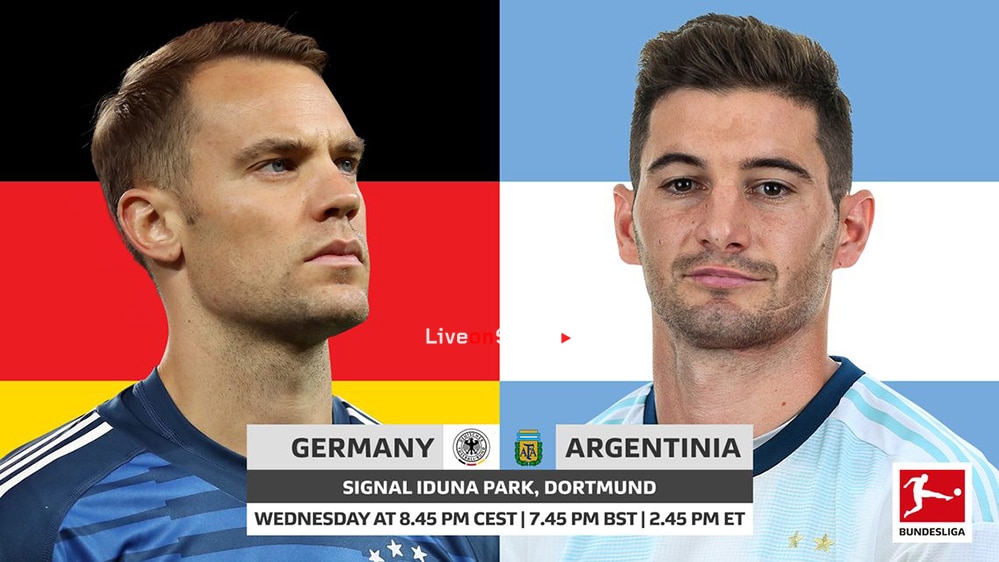 Germany will be looking to warm up for Sunday’s UEFA EURO 2020 qualifier in Estonia as they entertain Argentina in a high-profile friendly in Dortmund on Wednesday (kick-off: 8.45pm CEST/7.45pm BST/2.45pm ET).

Two of world football’s heavyweights, Germany and Argentina boast no fewer than six FIFA World Cups between them, with three of their previous meetings coming in the tournament showpiece itself. The atmosphere should be a little more relaxed at the Signal Iduna Park this week, but Joachim Löw will still be expecting a disciplined performance from his side, just four days ahead of a crunch EURO 2020 qualifying trip to Tallinn. Marc-Andre ter Stegen takes the place of captain Manuel Neuer in net, while at the other end of the pitch, Serge Gnabry will be looking to continue his recent hot streak alongside Marco Reus, Julian Brandt and Timo Werner. With Matthias Ginter having to pull out of the squad on Sunday after dislocating his shoulder, Löw will likely build a back three around Niklas Süle. Meanwhile, Suat Serdar has been called up as a replacement for the injured Toni Kroos, while Kai Havertz is another option in attacking midfield. Havertz’s Bayer Leverkusen teammate Nadiem Amiri could also make his debut for Die Mannschaft after earning his first call-up to the senior squad. Freiburg defender Robin Koch is also on board for the first time, while Hoffenheim’s Sebastian Rudy has been recalled.

Argentina are without a host of their biggest names in Dortmund. Angel Di Maria and Sergio Aguero have been left out of Lionel Scaloni’s squad, while captain and talisman Lionel Messi is still serving a three-month ban issued by CONMEBOL for comments made at this summer’s Copa America. The South Americans will also be without players from bitter domestic rivals River Plate and Boca Juniors, who go head-to-head in the second leg of the Copa Libertadores semi-finals later this month. Löw will be careful to warn his players against any complacency, however. The visitors still boast talented stars such as Juventus’s Paulo Dybala and Atletico Madrid’s Angel Correa, while Inter Milan striker Lautaro Martinez scored a hat-trick in last month’s 4-0 friendly win over Mexico. There are three Germany-based players in the squad – Leverkusen’s Lucas Alario, Borussia Dortmund’s Leonardo Balerdi and VfB Stuttgart’s Nicolas Gonzalez – with the former perhaps likeliest to get some game time.

Germany and Argentina have met in three FIFA World Cup finals. After losing 3-2 in Mexico in 1986, Die Mannschaft triumphed in Italy in 1990 and Brazil in 2014, on both occasions by a 1-0 scoreline.
The two nations have played each other 22 times. So far it’s 10 wins for Argentina, eight for Germany and four draws.
This is Germany’s first meeting with La Albiceleste since September 2014. Two months after winning the World Cup final in Rio de Janeiro thanks to Mario Götze’s extra-time stunner, Löw’s men suffered a 4-2 friendly defeat in Düsseldorf.
Gnabry has netted five goals in five games for Germany in 2019, improving his international scoring record to a remarkable nine goals in 10 appearances. The 24-year-old has also hit five in two matches for Bayern, including four in the 7-2 UEFA Champions League win over Tottenham.

EURO qualifiers: what to watch out for