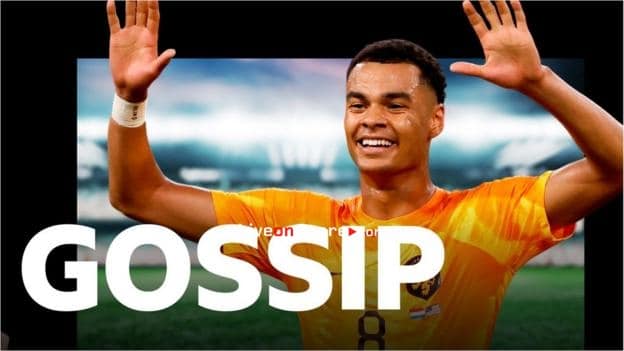 PSV and Netherlands winger Cody Gakpo, 23, says he would “think” about joining Manchester United, but has had no contact from the Premier League club. (NRC – in Dutch)

Tottenham and Liverpool are interested in signing Morocco midfielder Sofyan Amrabat, 26, from Fiorentina when the transfer window opens in January. (90min)

AC Milan could be willing to compete with Barcelona for the signing of Arsenal’s Brazil forward Gabriel Martinelli, 21, should they decide to sell Portugal winger Rafael Leao, 23, in January. (Calciomercato – in Italian)

Arsenal may have to postpone their planned move for Shakhtar Donetsk and Ukraine winger Mykhailo Mudryk, 21, after the injury to Brazil forward Gabriel Jesus. (Sun)

France midfielder Adrien Rabiot, 27, says he would like to play in the Premier League. The former Manchester United target’s contract at Juventus ends in 2023. (Express)

Roma are in advanced talks with the agent of 28-year-old Netherlands forward Memphis Depay over a move from Barcelona. (Sport – in Spanish)

Atletico Madrid are willing to listen to offers for 23-year-old Portugal forward Joao Felix, who wants to leave the club. (TVE, via Mail)

Arsenal academy boss Per Mertesacker could be hired by Germany’s football association to be their new sporting director. (Sky Germany, via Mail)