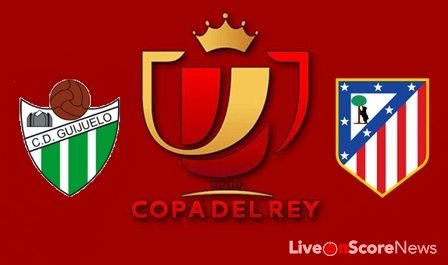 Guijuelo welcome Atletico Madrid to the Estadio Municipal de Guijuelo for a Copa del Rey Round of 32 clash scheduled to kick-off at 20:00 on Wednesday, November 30 and you can find all the live stream information including kick-off time in our match preview right here.

Everybody knows who Atletico Madrid are.

Bossed by one of the finest tactical minds in the world, Diego Simeone, Atletico possess some of the most technically adept players on the continent in free-scoring forward Antoine Griezmann, the defensive brilliance of centre back Diego Godin, the renaissance of exquisite attacker Kevin Gameiro and, of course, up-and-coming stand-outs like Yannick Carrasco, Saul Niguez and Agel Correa.

Atletico Madrid are arguably the best team outside of bitter rivals Real Madrid and FC Barcelona’s duopolistic stranglehold on La Liga but present unique challenges to anybody who competes against them, regardless of whether they are in the bottom half of the Primera Liga table, from a minor division in Eastern Europe or, indeed, an elite-level Champions League side.

CD Guijuelo are a modest club in the Province of Salamance who compete in a stadium with a capacity of 1,500, in the Segunda Division B, a division they have been in since 2006, when they won promotion from the Tercera Division.

To put things in perspective, Atletico are over 50 rungs higher in the professional pyramid of league football in Spain, than Guijuelo and though it is likely Simeone will use the midweek match to rest a number of established first-teamers, we could see the team more reliant on those highly-rated youngsters that the manager has at his disposal.

Atletico travel to Guijuelo for this Copa del Rey match on Wednesday evening.

Hercules vs Barcelona- Preview and Prediction