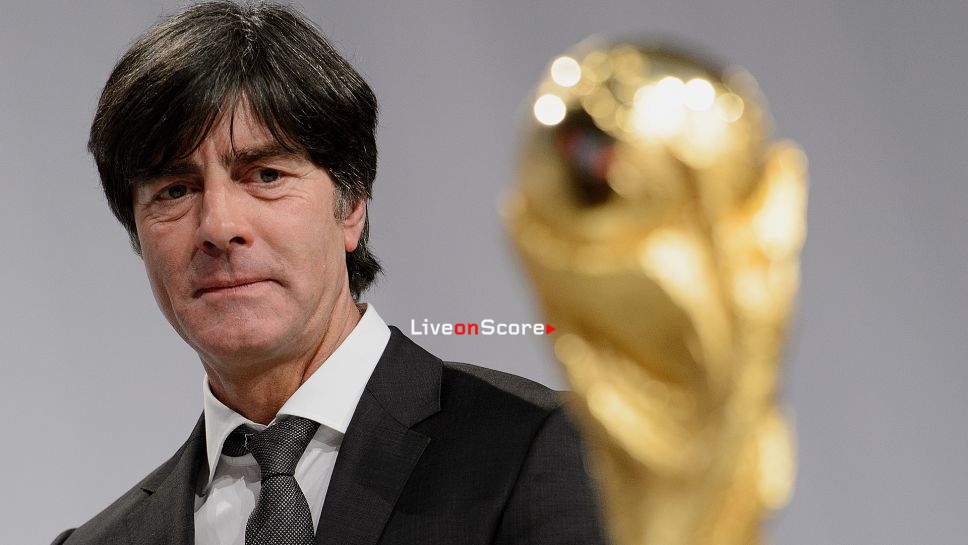 How Germany Could Look At The 2018 World Cup

Joachim Löw has confirmed his 23-man squad for the FIFA World Cup in Russia this summer. Bundesliga superstars Manuel Neuer and Marco Reus have made the cut despite recent injuries, but there’s no place for Mario Götze, who scored the winning goal in the final against Argentina four years ago, nor Leroy Sane, despite his impressive form for Manchester City in their English Premier League title-winning season…

Naturally as the home of the world champions, the Bundesliga has contributed some 15 players to the selection, with the remaining eight all honed in Germany’s top flight. Now attention turns to how Löw might assemble his embarrassment of riches in Russia. 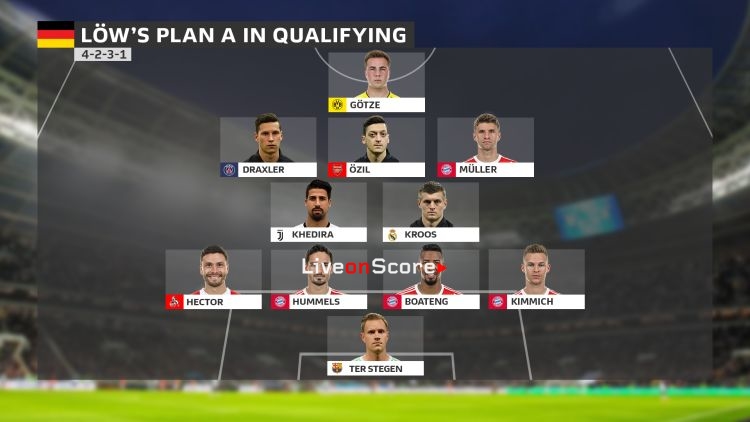 Germany qualified for the finals in Russia with a perfect record of 10 wins from 10 in UEFA Group C. No fewer than 21 players found the target as Die Mannschaft became just the second team in history – after Spain in 2010 – to progress with a 100 percent record. Löw nonetheless showed certain predilections…

First among them was a preference for a 4-2-3-1 which has become the formation du jour in Germany. The world champions used it in seven of their 10 wins. Familiar faces from 2014 racked up the minutes – Mats Hummels and Thomas Müller started eight and nine games respectively – while their Bayern Munich teammate Joshua Kimmich removed any doubts that he would be the natural successor to the retired Philipp Lahm at right-back, scoring two and providing a team-high nine assists.

Löw initially struggled to settle on his first-choice centre-forward with a Miroslav Klose-shaped gap to fill, though. Götze, Sandro Wagner and Lars Stindl started three games apiece. Götze played the most minutes with 323, Wagner scored the most goals with five, yet not one of that trio will be in Russia. Stindl is injured, while Götze and Wagner are surprise exclusions.

Löw is famously conservative in his squad selections: Phillip Max ended the season just gone as the Bundesliga defender with the most assists since records began, usurping Lahm, and yet the Augsburg man had little chance of dislodging Jonas Hector at left-back – a player relegated with Cologne but who has 36 caps to his name.

In Neuer and Reus, Löw has two world class players at his disposal who at one stage looked doubtful. Reus – so unlucky with injury – missed the triumph in Brazil as well as UEFA Euro 2016, but returned from knee ligament damage to plunder seven goals in the final 10 Bundesliga games for Dortmund. Julian Draxler offers competition on the left, but after the surprise exclusion of Sane, Reus should finally get the chance to shine at a major tournament.

Neuer has been declared fit and will travel as first-choice No.1 and captain. Marc-Andre ter Stegen might be the ablest understudy in world football, but if he’s impressing at the Camp Nou, it’s by interpreting the position in a way in which Neuer defined. The Bayern man is perhaps the best goalkeeper in the history of the game, let alone the best available option for his country.

Up front, Timo Werner has become the first-choice striker. After firing Germany to Confederations Cup glory last summer with a tournament-high three goals, the RB Leipzig man has now scored seven in 12 full international appearances. Mario Gomez and Wagner would both have offered a Plan B to his pace-based game. Gomez, a veteran with 31 goals in 73 caps, has been preferred as much for his off-field influence as on-field contribution, neither of which should be underestimated.

Löw is not married to a 4-2-3-1 formation. He played three at the back three times in qualifying, in victories against San Marino, the Czech Republic and Azerbaijan. Personnel-wise, there were five big winners when Löw changed tack: Wagner, Stindl, Julian Brandt, Emre Can and Matthias Ginter.

Brandt played 90 minutes all three times that Löw elected to play with his widest possible midfield. With Müller inside him, it was the Bayer Leverkusen man who hugged the touchline. Kimmich was trusted to fill in as a third centre-back although he spent the majority of the campaign overlapping, with Borussia Mönchengladbach’s Ginter on the other side.

With San Marino and Azerbaijan boasting FIFA world rankings of 208 and 126 respectively, it is perhaps unsurprising that some of the players used to dismantle them failed to make this first cut, with Liverpool midfielder Can, Arsenal defender Shkodran Mustafi and Ajax winger Amine Younes joining Wagner on the sidelines. However, Brandt’s ability to play across the midfield and Ginter’s willingness to operate anywhere in defence have punched both men’s tickets to Russia.

Jerome Boateng’s own injury travails – the Bayern man missed 15 Bundesliga games in 2017/18 as the Bavarians wrapped up a record sixth consecutive title – mean that Löw might be glad to have a tactical option that reduces his need for world class centre-backs in Russia.

A Boateng-less back three picks itself, but with such attacking thrust supplied from midfield, Gomez should lead the line in a 3-5-1-1. If Germany win their first two group games against Mexico and Sweden, a change in tack against South Korea goes from being plausible to probable. Werner would likely get a rest before the last 16 and penalty-box predator Gomez, who managed a goal every two games for VfB Stuttgart, would happily lap up any chances created in his absence.

Reus’ timing could hardly be better, meanwhile. With Stindl missing he is the player most adept at operating between the lines. Raumdeuter Müller might have something to say about that, but with the on-field leader offering experience in a youthful midfield, Reus could get a run out at his favourite No.10 position.

While it’s possible Germany have the best XI available to any nation at the finals this summer; it’s beyond doubt that they have the best Plan C in world football. Löw could pick any of the above and still be in with a chance of lifting the trophy.

Mario Gomez plundered eight goals in the Rückrunde alone as Stuttgart ended up closer to Europe than relegation; Kevin Trapp and Julian Draxler were French champions with Paris Saint-Germain, yet all could find themselves bit-part players.

Sane, Ilkay Gündogan, Niklas Süle, Sebastian Rudy and Draxler were constituent parts of title-winning teams in England, Germany and France this term with Manchester City, Bayern and Paris Saint-Germain respectively, yet might have to settle for a place among the substitutes in Russia. How many countries could afford to have five champions of that calibre watching on from the bench?

Werner recently said that Germany were “absolutely favourites” to defend their crown. Given the above, would anybody be brave enough to disagree?

As if Germany’s sheer strength in depth wasn’t abundantly obvious already, just look at the players that haven’t even made Löw’s provisional 27-man squad. Andre Schürrle assisted Götze for that winner four years ago, yet the pair will watch on, alongside Julian Weigl, as Reus leaves as the only Dortmund player joining up with Germany in Russia.

As if Germany’s sheer strength in depth wasn’t abundantly obvious already, just look at the players that haven’t even made Löw’s provisional 27-man squad. Andre Schürrle assisted Götze for that winner four years ago, yet the pair will watch on, alongside Julian Weigl, as Reus leaves as the only Dortmund player joining up with Germany in Russia.

Sane scored 10 and assisted 15 as Pep Guardiola’s City romped to the English title. There is still time for the talented winger – who is still only 22 – but defender Benedikt Höwedes, who spent last season on loan at Juventus from Schalke, who played seven of Germany’s eight games in Brazil, may not get another chance to add to his 44 caps.