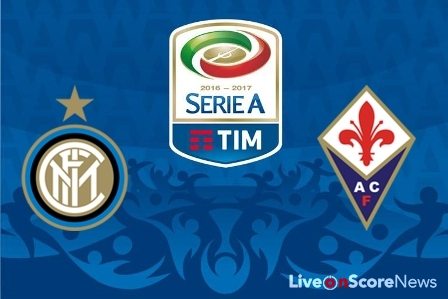 Inter host Fiorentina hoping for success against the team that leapfrogged them in the table in Week 13.

Both teams’ Europa League commitments have meant that the match has been postponed to Monday to allow the squads adequate rest and they’ll need it after some dire results. The Viola are at least only one point away from qualification and were unlucky to lose 3-2 at home against PAOK. For the Nerazzurri it was new Coach, same problems, as Stefano Pioli saw his side take a 2-0 lead at Hapoel Be’er-Sheva only to fall apart for a 3-2 final result. Out of the Europa League in the group stage, they have now got to focus on turning the Serie A campaign around too.

Fiorentina are currently enjoying a purple patch (no pun intended) unbeaten in six Serie A rounds, which continued in their most recent run-out, a 4-0 victory over Empoli. However, their torrid start to the campaign means that the Tuscans sit only two points higher than Inter, as the Milanese club’s previous Coach Frank de Boer managed to rack up some early results before the poor run of form that saw to his dismissal. Fiorentina also have a game in hand to be played at Genoa next month.

Pioli made his debut with a 2-2 draw in the Derby della Madonnina, but lost Gary Medel until 2017 to a knee injury. This is a significant blow to Pioli, who used the Chilean defensive-midfielder in the position he plays for his country, centre-back, to great effect. The Coach is likely to replace Medel with a fellow South American in Jeison Murillo, a regular under both De Boer and Roberto Mancini.

Fiorentina Coach Paulo Sousa also has defensive changes to make, as centre-back-turned-right-back Nenad Tomovic is suspended, having picked up his fifth yellow card against Empoli. The Serbian international has been putting in high quality performances that have incited rumours of a January transfer to Chelsea. His likely replacement Carlos Salcedo has a similar playing style, which should make the transition as seamless as possible, though it is a change that Sousa would not have wanted to make.

Inter captain Mauro Icardi has pushed on from his dispute with the fans, and is sitting atop of the Serie A goal-scoring chart alongside Andrea Belotti and Edin Dzeko, with 10 to his name. Having shared the Capocannoniere award with Luca Toni two seasons ago, he will be desperate to claim the top spot for himself this time. However, it may be a concern for Pioli that Icardi has scored two more goals in the league than the rest of his squad combined, with his nearest rival being Ivan Perisic on four.

Sousa is having no such trouble, as the goal-scoring burden has been spread primarily between striker Nikola Kalinic and winger Federico Bernardeschi, with five and six Serie A strikes respectively. Furthermore, second choice striker Khouma Babacar is making the most of the limited opportunities afforded to him, and despite being tasked with assisting goals rather than scoring them, Josip Ilicic tucked two away against Empoli.

Neither squads have been particularly prolific in front of goal, both having scored 18 – fewer than newly-promoted Cagliari. However, Fiorentina’s defensive record is second only to that of Juventus, and they’ve conceded five goals fewer than their Monday opponents. It is likely that defence is where the game will be won or lost, and if the Viola are able to keep Icardi quiet, they are likely to come out on top.

Keep an eye on: Federico Bernardeschi (Fiorentina) – The young Tuscan native is currently enjoying the form of his life, and has scored three goals in his last two matches. Bernardeschi has already matched his goal tally from last year, and appears to be enjoying playing in the more advanced role entrusted to him. This will also be an intriguing test considering reports Inter want to swoop for the versatile Italy international.

Stat fact: Fiorentina have a great record against Inter at San Siro, unbeaten here since September 2013. The Viola have won their last four meetings with the Nerazzurri, home and away, scoring 10 goals and conceding two.