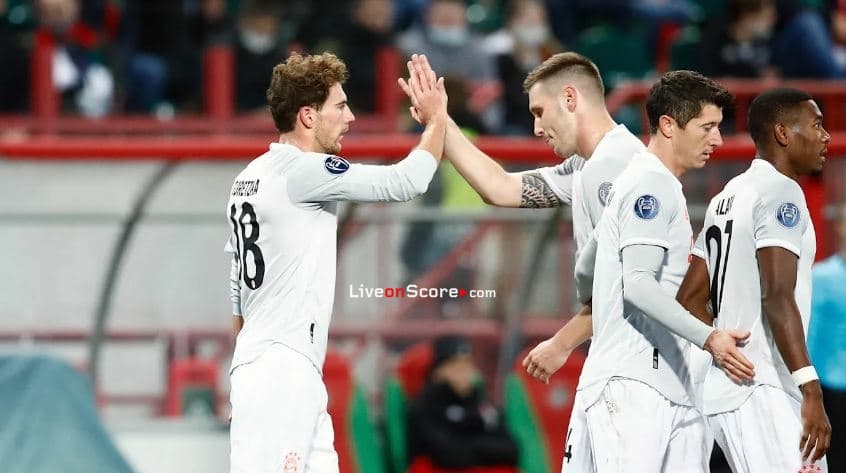 Manuel Neuer: This spirit is in the team

Well-fought and rewarded in the end! FC Bayern celebrated a hard-earned 2-1 win at Lokomotiv Moscow on Tuesday evening on Matchday 2 in Group A of this Champions League campaign. “The 2-1 victory was deserved, even if it wasn’t quite as obvious as we had hoped it would be,” Hansi Flick surmised. The scorer of the 2-1 winner, Joshua Kimmich, agreed with his coach: “We’re taking this victory with us, but we know we didn’t shine. fcbayern.com has collected the reaction from the game.

Reaction to the match in Moscow
Hansi Flick: “I told the team that it was hard work, but in the end it was a deserved win. I’m certain other teams in our group will also have problems when they come to Moscow. That’s why this victory was important. The opener was sensational. Moscow did very well, they played very deep and used long balls time and again. That’s why they hurt us a few times, because we had to run some unnecessary yards. The 2-1 win was deserved, even if it wasn’t quite as obvious as we had hoped it would be. It’s normal to have such games. When you win those kind of games, it’s all the more beautiful.”

Manuel Neuer: “We’re satisfied with the result. It was a difficult game. We had to do a lot to take the three points with us. Lokomotiv did well, they were compact. We had some chances to decide it earlier. The equaliser 1-1 put us in a bit of a predicament. But by and large we’re satisfied, also with the way we came back. We always believe in ourselves, this spirit is in the team. But we can’t rely on it and have to do something about it again and again. Basically it is our way of playing that we stand up and attack our opponents from the front, and long balls into deep areas are unpleasant. We were also up against fast players, so I think it’s normal that these things can happen.”

Joshua Kimmich: “It was a workmanlike victory. We didn’t turn in out best performance today, and Moscow didn’t do a bad job. We took the lead more or less out of the blue. Then we had several chances to decide the match but didn’t take them. It was exciting that way. They had a few dangerous counters in the second half, we were lucky then. We didn’t do so well with regard to some long balls, fortunately they didn’t convert them. We’re taking this victory with us, but we know we didn’t shine.”

Marko Nikolić, Lokomotiv Moscow head coach: “We defended well today. We were motivated, disciplined and brave. Besides, the fans created a great atmosphere at the stadium, which spurred our players on even more. We played well but were up against the world’s best team. In a few years we’ll be able to assert ourselves better against teams like these.”

Zidane: "The team showed its character"