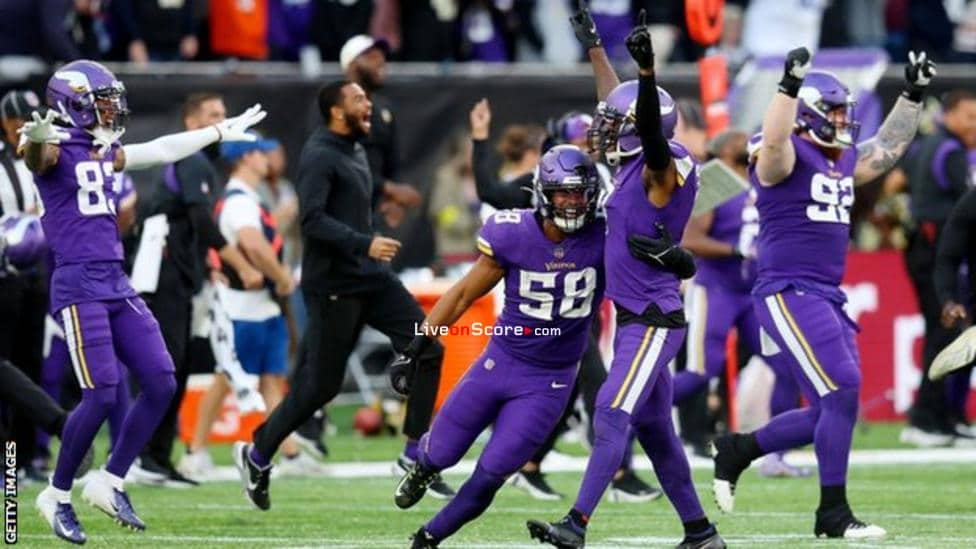 The Minnesota Vikings inflicted an agonising 28-25 defeat on the New Orleans Saints in arguably the most entertaining NFL game played in London to date.

A crowd of 60,639 at Tottenham Hotspur Stadium thought they were set for overtime when the Saints, who trailed for most of the game, made it 25-25 with a field goal with one minute 51 seconds remaining.

But the Vikings hit back with Greg Joseph restoring their three-point lead with his fifth field goal of the day with just 24 seconds on the clock.

The Saints were still able to make enough ground for Wil Lutz to attempt a field goal from 61 yards – four yards short of the NFL record.

But his kick struck the left upright and bounced on to the crossbar, known as a ‘double doink’ in the NFL, before dropping just in front of the posts as the Vikings celebrated after a pulsating finale.

Despite seeing their starting quarterback and two attacking stars ruled out through injury, New Orleans fought back from 16-7 down in the third quarter to lead 22-19 in the fourth.

Justin Jefferson’s three-yard touchdown – Minnesota’s second of the day after Alexander Mattison’s early score – put the Vikings back in front with just over four minutes left, before the late field goal drama.

The NFL’s last trip to Tottenham also produced a thrilling finish last October, as the Jacksonville Jaguars beat the Miami Dolphins with the last kick of the game.

Yet a frantic final quarter in the north London sunshine topped that drama.

The opening game of this year’s three-game series brought together two teams hoping to reach this season’s play-offs after narrowly missing out last year.

But with the Saints having been shorn of quarterback Jameis Winston, running back Alvin Kamara and wide receiver Michael Thomas, the Vikings looked set to build on their positive start to the season with a routine win.

Mattison scored on the game’s opening drive and the Saints levelled after a Chris Olave touchdown before defences began to dominate.

A run of three field goals either side of half-time saw Minnesota lead 16-7 and the game burst into life late in the third quarter, with the Saints fighting back with two touchdowns.

Running back Latavius Murray and utility man Taysom Hill both ran it in from close range to cap long drives and give the Saints the lead for the first time, before they added a two-point conversion to make it 22-19.

Minnesota’s Justin Jefferson is arguably the NFL’s best wide receiver having claimed the most receiving yards in their first two seasons (3,016) and he stepped up by running the ball in from three yards on the next drive.

Jefferson also made a 39-yard catch to make the ground for Joseph to kick what proved to be the decisive score.

And although Lutz levelled it up with a 60-yard field goal, he couldn’t make it moments later from a yard further out.

“I thought they were both in – I hit them both out of the screws,” he said. “I was a little surprised when the second one didn’t bounce in as I hit it just as I wanted to.

“I heard the first doink, saw the second one then saw them celebrate so knew it didn’t go in.

“I hit them both as flush as I could, I’m just stone-cold shocked that the second one didn’t go in.

“I gave it a chance but just didn’t get the right bounce – it’s just so frustrating. I wanted to hit that kick for the team, we needed to win today.”

The win means Minnesota now have a 3-1 record while New Orleans have dropped to 1-3.

It also whets the appetite for next Sunday’s game at Tottenham, when the Green Bay Packers become the final NFL team to play in London against the New York Giants, before the Jaguars face the Denver Broncos at Wembley on 30 October.