Last season’s Serie A runners-up SSC Napoli has agreed to a £78 million offer from rivals and reigning champions Juventus FC for the transfer of the Italian domestic league’s top scorer Gonzalo Higuaín, according to recent rumors. 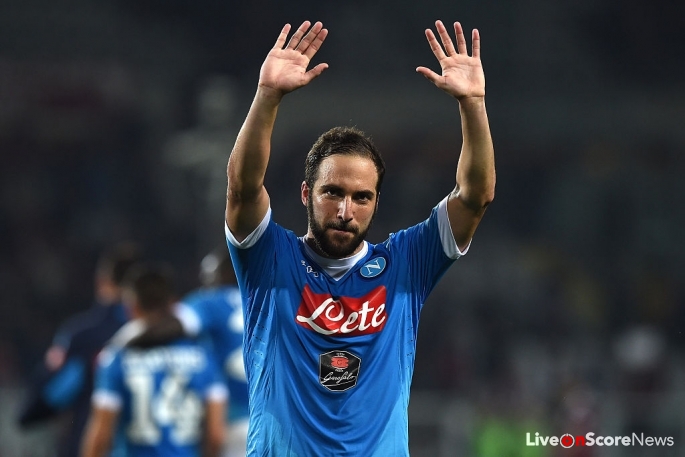 The 28-year-old Argentina international, who top scored the Serie A last term with a sensational 36 goals in 35 domestic top flight appearances, has a release clause of £78.2 million and the Old Lady is said to be prepared to pay £58.2 million and add players Roberto Pereyra and Rolando Mandragora to the deal to make up the balance.
Daily Mail Online reported that “the astronomical amount of money involved in the move could be a sign that the Old Lady are planning for life without Paul Pogba”, who is currently being targeted by English Premier League giants Manchester United for a fee of £100 million.
The report noted, though, that the planned £23 million and £20 million exits of forwards Alvaro Morata and Simone Zaza may be enough to fund Higuaín’s signing, which means Pogba could still stay in Turin for the foreseeable future.
Napoli president Aurelio De Laurentiis is reportedly furious about the rumors linking Higuaín to Juve as he believes their prized striker will never join their fiercest domestic rivals anytime soon.
His son, De Laurentiis Jr., is said to be as infuriated as well, recently telling reporters that “it’s just a hoax, you mustn’t believe everything”, referring to Higuaín’s potential move to Turin.
Higuaín is also a long-time target of another Premier League side, Arsenal FC, but with Juve’s approach, the Gunners may miss out on the 6-foot-2 French-born Argentinian this summer.
Arsenal head coach Arsene Wenger’s search for additional strikers has not yet ceased as the 66-year-old’s French mentor’s “current first-choice striker Olivier Giroud has not hit the 20-goal mark in a season in any of his four years at the North London based outfit with his highest tally being 16”, as per Caught Offside.
The report then mentioned that Italian journalist Fabrizio Romano is the source of the Higuaín to Juventus rumors, saying that the Argentine is set to sign a four-year deal with Le Zebre.
Higuaín was also reported to have rejected a massive £800,000-a-week salary offer from Chinese Super League club Hebei China Fortune this summer as he chose to stay in