LiveonScore.com LEIPZIG, GERMANY - JULY 21: (THE SUN OUT, THE SUN ON SUNDAY OUT) Darwin Nunez of Liverpool celebrates after scoring the third goal during the pre-season friendly match between RB Leipzig and Liverpool FC at Red Bull Arena on July 21, 2022 in Leipzig, Germany. (Photo by John Powell/Liverpool FC via Getty Images)
Football, World Football News

Darwin Nunez scored his first Anfield goal for Liverpool and Alisson saved a penalty as the Reds defeated West Ham in an incident-packed encounter.

Nunez had already gone close with a rasping attempt when he rose to meet Kostas Tsimikas’ cross and plant a downward header beyond the reach of Lukasz Fabianski.

The busy Nunez was presented with a chance to double the lead moments later but this time Fabianski was able to save before the Hammers were awarded a penalty after Joe Gomez’s foul on Jarrod Bowen.

Bowen picked himself up to take it but Alisson produced a fine diving save in front of the Kop to ensure Liverpool backed up their excellent win over Manchester City on Sunday with another three points.

Nunez starting to settle
Liverpool fans turned up at Anfield wondering whether the team could follow up the win over Manchester City on Sunday.

The Reds have been unpredictable this season but they made it three straight wins in all competitions as Nunez made his mark.

It has not been an easy start to life for the Uruguay striker who arrived to much fanfare from Benfica for an initial £64m in the summer.

Against West Ham, Nunez offered further evidence he is starting to find his rhythm and confidence.

He put himself in an excellent position to meet Tsimikas’ cross and beat Fabianski for his third goal in four games.

Nunez was lively throughout and could have had a hat-trick but 37-year-old Fabianski denied him with two fine saves while the Liverpool forward also hit the post with a powerful attempt.

His scoring streak is welcome news for manager Jurgen Klopp who has lost Diogo Jota and Luis Diaz to injury for the foreseeable future.

Hammers pay the price
Nobody could seriously question the job David Moyes has done since returning to West Ham in December 2019.

Two top-seven finishes and a Europa League semi-final is evidence of a club moving forward but the Hammers are struggling for consistency after a sixth defeat in 11 Premier League games.

Moyes said the assistant referee “needs to go to Specsavers” after being angered by the officials during the 1-1 draw at Southampton on Sunday.

But his side only had themselves to blame for not taking their chances at Anfield.

But the England forward was brilliantly denied by Alisson, who followed up his assist for Mohamed Salah’s winner against Manchester City with a crucial save.

Substitute Said Benrahma and Gianluca Scamacca also had great chances to equalise while, in the closing moments, James Milner produced a goal-saving challenge to deny Tomas Soucek a certain equaliser.

The Hammers have now scored just nine goals in 11 Premier League games and their lack of spark in front of goal will worry Moyes. 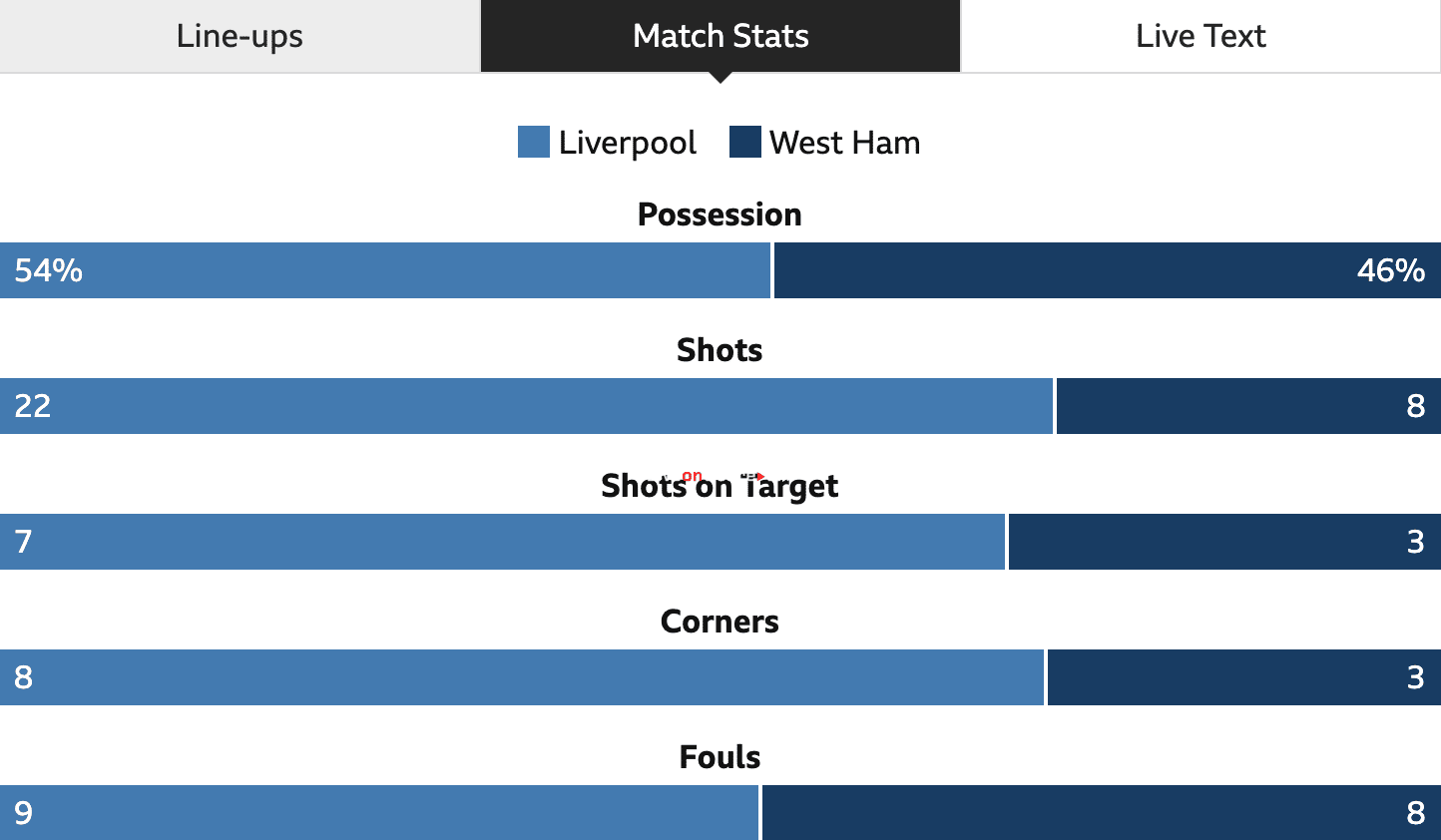