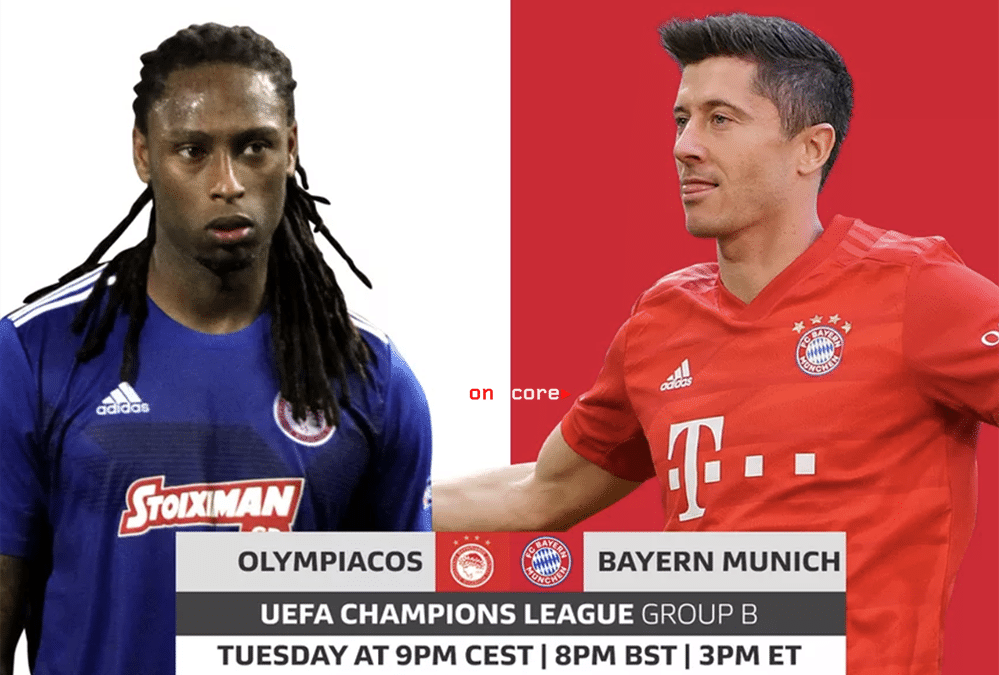 Robert Lewandowski is out to continue his eye-watering scoring run when UEFA Champions League Group B leaders Bayern Munich travel to Greece to take on Olympiacos on Tuesday (kick-off: 9pm CEST/8pm BST/3pm ET).

Latest
Olympiacos better batten down the hatches. They might be top of the Greek Super League, but Pedro Martins’ troops have just the one point to show for their first two Champions League outings of the campaign – and that came against a Tottenham Hotspur team Bayern hammered 7-2 in London on Matchday 2. They also lost 3-1 to Red Star Belgrade, who were comfortably beaten 3-0 in Munich. Olympiacos came from behind to edge OFI 2-1 in their previous domestic assignment, but are currently enduring their worst ever run in European competition, having gone 10 matches without a win (D2, L8). Yassine Benzia is suspended on what could be a chastening night for Greece’s record champions.

Just ask Spurs. The 2018/19 Champions League runners-up had no answer to a ferocious display of attacking might from Bayern as Lewandowski maintained his record of scoring in every club game this season with a brace, while Serge Gnabry helped himself to four clinically taken second-half goals. Bayern’s dastardly duo were at it again at the weekend, although the record German champions could only draw with Augsburg in a game overshadowed by a serious knee injury to defender Niklas Süle, who is expected to be out for several months. Niko Kovac has a plethora of defensive alternatives, though, and may even shuffle his pack further up the pitch, with Thomas Müller and Ivan Perisic among those in contention to start.

Match stats
Lewandowski has scored 16 goals in 12 competitive matches for Bayern this season.
The four-time Bundesliga top scorer was on target the last time Bayern met Olympiacos – a 4-0 win in the 2015/16 group stage.
Bayern also won their last trip to Greece, and have scored 14 goals in their four matches against Olympiacos, keeping clean sheets in the last three fixtures.
Germany’s record champions are unbeaten in their last 10 European away games (W7, D3), scoring at least two goals in all but the goalless draw at Liverpool last season.
Gnabry became the 14th player to score four times in a match in the competition on Matchday 2, and the first to hit four in the second half.
Olympiacos have lost their last five games against Bundesliga clubs, scoring only one goal while conceding 11.