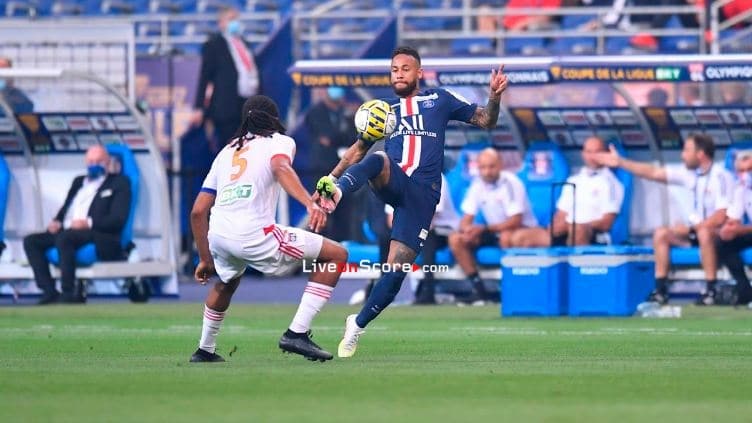 Only a week after they had claimed the Coupe de France against Saint-Etienne (1-0), the Parisians were back at the Stade de France with more silverware at stake. To counter Olympique Lyonnais, Thomas Tuchel set up his side in a 4-3-3 with Marco Verratti a notable addition to the starting XI.

The suffocating heat in the north of Paris meant the conditions were going to be tough for both sides, who nonetheless sought to find a way through. Chances came and went at both ends:Neymar Jr was first (5′, 8′), with Memphis Depay and Bruno Guimaraes following soon after (11′, 13′).

With Lyon highly motivated, the French champions’ defence was tested. There was little time to catch breath, despite the 33°C heat, though Verratti often managed to keep his cool in the centre of the park. With one astute pass, he sent clear a posse that was only just halted by the Lyon rearguard (30′).

A Neymar Jr long-distance effort (43′) and Marquinhos’ acrobatic clearance as well as a save by Anthony Lopes from Di Maria (45′) ensured the sides were level at the break.

There was no change in personnel nor rhythm after the interval. Neymar Jr had a brace of chances (47′, 49′) and Memphis Depay fired in a powerful shot (49′), but neither changed the scoreline. With the heat not dropping, fatigue began to be a factor for both sides.

Pablo Sarabia burst forward at the back post but sent his effort wide (75′), while Keylor Navas’ gloves kept out Maxwel Cornet’s free-kick (80′) and Karl Toko-Ekambi’s low shot (83′). Neymar Jr’s header might have been the decisive factor in the encounter had Lopes not been as quick and agile to tip it over the bar (86′) while he also thwarted Sarabia to send the game into extra-time (89′).

Two periods of 15 minutes – divided by a very welcome refreshment break – saw neither side manage to force the issue. Angel Di Maria then Bertrand Traoré had chances (95′), while Rafael was sent off for bringing down Angel Di Maria just outside the penalty area (119′), but no goal followed. It was Keylor Navas who would take one decisive step in stopping Traoré’s shoot-out effort before Sarabia took the other by scoring his spot-kick to claim the cup for the Rouge et Bleu.