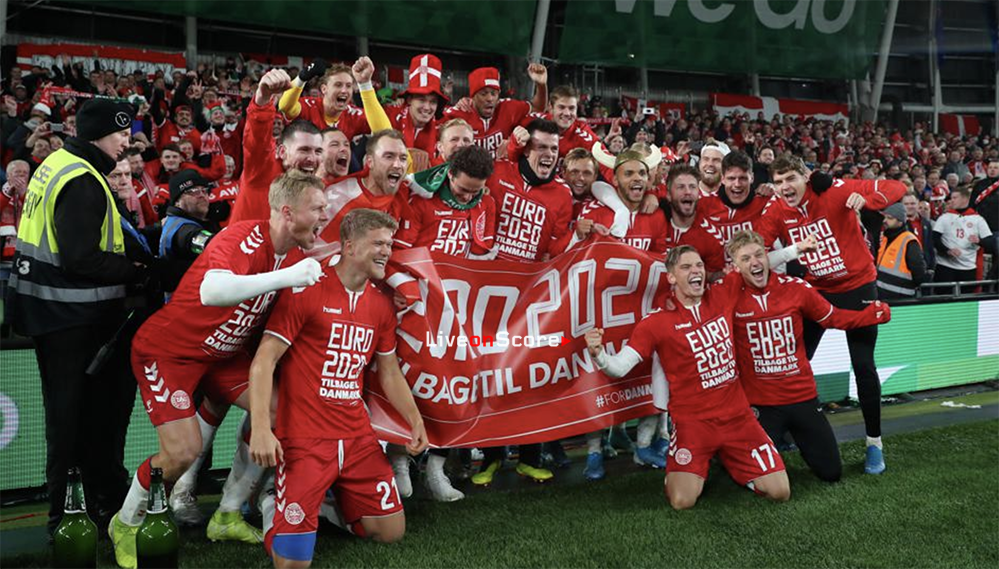 Martin Braithwaite stabbed in the crucial goal before Denmark held off a late Irish rally to reach UEFA EURO 2020.

Åge Hareide’s side held on for the draw they needed to seal their place at UEFA EURO 2020.

Conor Hourihane was denied by Kasper Schmeichel from the only reasonable chance of a cagey first half, with the visitors’ fluidity not helped by enforced substitutions of injured pair Thomas Delaney and Andreas Cornelius inside 33 minutes. Ireland lost influential defender John Egan at the interval too but continued to shade the contest with set pieces a constant worry for the Denmark rearguard.

What drama!!! Amazing that such a long qualifying campaign should come down to the final few nail-biting seconds. Denmark squeeze through, Ireland have the safety net of the play-offs. So more drama still to come for them no doubt! I’m off to catch my breath.
Ian Holyman

Ireland: Will take part in the play-offs as next best-ranked team in League B
Denmark: Qualified for the finals as Group D runners-up.

Matt Doherty, Ireland defender
Everyone is as flat as a pancake right now. We had control of the game, wave after wave of attack. We played well and have to take that confidence into March. We have only scored seven goals, you need to score goals to win games and we haven’t scored enough. It was a tough group, we went all the way and we have to make sure we are right in March.

Shane Duffy, Ireland defender
It’s disappointing, I thought we were the better team and one slip has cost us. We believed we could beat them, it was difficult when they went 1-0 up but we kept going and we have to pick ourselves up for some big games in March. They didn’t create that many clear-cut chances, we had a few, I had the feeling this was our game, this was our moment.

Kasper Schmeichel, Denmark goalkeeper
There was not a lot of quality from both sides, like always it was a tight affair. We didn’t hit anything we tried today and had to rely on grit and determination. We needed it today because we were under pressure. It means the world. We are a small nation and the chance of playing home games in a major tournament are so small. To give our fans that is amazing and unique.

Pierre-Emile Højbjerg, Denmark midfielder
I’m a little speechless. Before the season started, some goals were set and this was one of the biggest goals of the season. I’m just proud.

European Qualifiers: How the play-offs for UEFA EURO 2020 work

Spain 5-0 Romania: Gerard at the double

Denmark and Switzerland through, Italy perfect