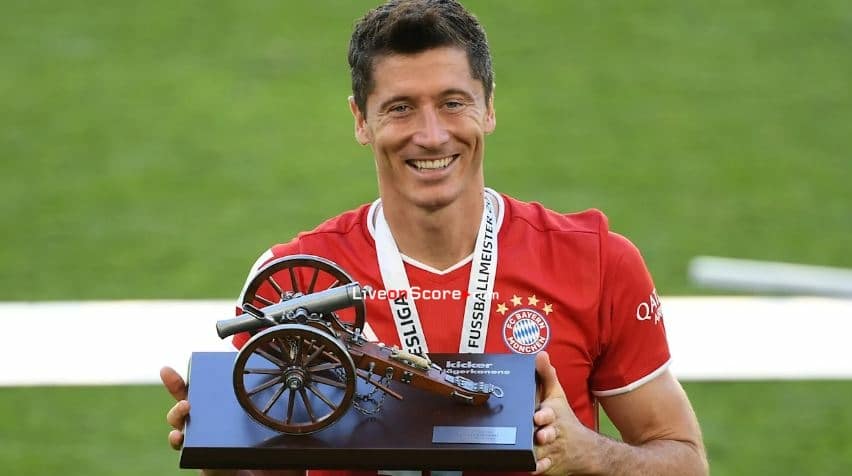 What a season this man had! Robert Lewandowski, top scorer in three competitions in the last twelve months broke record after record and played a decisive role in winning the treble with Bayern, scoring an incredible 55 goals in just 47 competitive matches.

Majority of Bayern fans voted for Lewandowski
The German record champions’ fans showed their admiration for this outstanding performance and named the exceptional Polish striker their FC Bayern Player of the Season 2019/20. 51% of the votes cast were in favour of Lewandowski, who was also named Germany’s Footballer of the Year last season. Lewy rallied the majority of FCB supporters behind him, leaving Alphonso Davies (16%) and Thomas Müller (13%) a long way off in second and third place respectively.

Best season of his career

Lewandowski’s win had become all but a formality: Five times last season alone, the 31-year-old picked up the gong for Player of the Month (in August, September October, November and June). In addition, the striker, a man already accustomed to success, proved to be even more clinical than in previous years. His haul in 2019/20 beat his previous best tally of 43 goals from the 2016/17 season by a full dozen.

And it’s hard to imagine a situation in which the Pole’s thirst for goals will abate in the near future. Last autumn, Lewandowski became the first player to score on the first eleven matchdays of a Bundesliga season. Bayern fans eagerly await what records the striker can break in this upcoming campaign.

The anticipation at FC Bayern ahead of the new season is immense! On Friday, the side will kick-off their title defence with a match against FC Schalke 04: