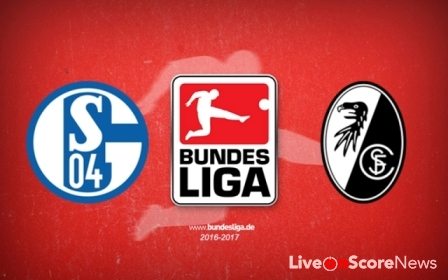 Schalke 04 vs Freiburg – Preview and Prediction

Schalke vs Freiburg match is going to be held on 17th December at Stadion im VELTINS-Arena. It’s an important football clash between two German football teams where both the teams will try to give their best efforts to win this match of German Bundesliga 2016-17 season. Schalke suffered a 0-1 home defeat against Leverkusen and Freiburg registered a 1-0 home win against Darmstadt in their previous league matches.

Both teams have played 32 matches against each other in all the competitions. Schalke has registered 14 wins, 6 draw and 12 defeats against Freiburg. Freiburg has scored 42 goals against Schalke and concedes 46 goals against them.
Schalke held a goalless home draw against Freiburg in their last meetings in the match of German Bundesliga on 11th Apr, 2015.
Schalke vs Freiburg: Prediction

Freiburg will try their best to secure at least an away draw from this match and Schalke will try to a home win from the fixture. Schalke is slightly better side to compare Freiburg when they will play against each other at Stadion im VELTINS-Arena.

Predicted result will be a home win for Schalke.

Sevilla vs Malaga - Preview and Prediction

Sassuolo vs Inter - Preview and Prediction