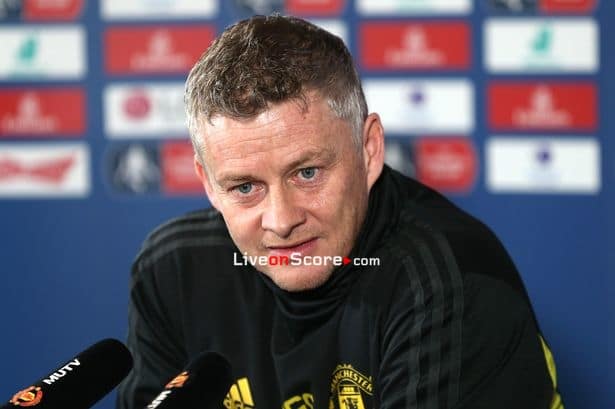 The manager sat down in front of reporters at the Aon Training Complex on Wednesday morning and began by providing an update on the squad, admitting that Aaron Wan-Bissaka and Daniel James are both set to miss Thursday evening’s match at Pride Park.

Solskjaer also offered his opinion on whether Rooney is under-appreciated within the football community, before reacting to questions about Liverpool exiting the FA Cup and, therefore, ending all talk of repeating United’s 1998/99 Treble. Check out everything that the boss had to say…

Good morning. Just a bit of housekeeping injury-wise ahead of a game like this. Dan James missed out at the weekend…
Yeah and he’ll probably miss out on this one as well and Marcus [Rashford] and Paul [Pogba] are still out and I think Aaron might be struggling. He’s got a test today, but he struggled in our last game against Everton with his back, so he might be out.

There was some more hopeful noises regarding Paul and perhaps the Manchester derby, or even the Spurs game. You’re the manager, you pick the players, what’s the situation?
Paul’s still working with the physios outside and he won’t be training with the first team until next week. So then let’s see how long that will take, but he’ll need some time to train to get his football fitness back.

And I imagine, after the weekend, people will jump to conclusions that Sergio Romero might get a start, but he probably will won’t he because it’s the cup?
Well it is not a given, of course, but Sergio has done well in the games he has played, definitely, but I have no qualms about playing David in every game ,to be fair, because what he’s done and his performances, they’ve been great. The save just after, I was 100 per cent sure it was offside with [Dominic] Calvert-Lewin, but it wasn’t. So it was a point-saving save for us just after, so he’s making amends.

There is a lot of focus on Mr Rooney. Do you think he is under appreciated in some quarters? The stats speak for themselves, but it does feel like he doesn’t get the credit he deserves…
Well he’s been a fantastic player for Man United and he played here for so long. He’s the club’s top scorer, he’s won so many trophies. For me, I don’t think the fans under-rate him. I think everyone really, really appreciates what he did for us and he’s still very welcome. He’s still around the place, he comes to Old Trafford, so he’ll get a good reception from our away fans in that game.

What kind of threat will he bring?
I don’t think any Man United player worries what any fan, other than Man United fans, think about them and that’s the thing, that was the key for Wazza. He gave absolutely everything for this club and what he’s done, we all appreciate that. But any goal he scores against us will be chalked off his score tally! He doesn’t want to score too many of them!

How much of a threat will he be tomorrow?
He’s a threat in and around the box, set-plays and, of course, in this game, Wayne will show what he can do and he wants to prove that there’s still fight in an old dog. So we’ve got to be on our toes, not give him any space in and around the box, or in midfield, because, at the latter end, when he played in midfield, you can see he’s got a [Paul] Scholes-like passing range.

We’ve seen what he’s done on the pitch and what he’s capable of, but now he is in this player-coach role. Did you ever see that with Wayne?
Maybe not. Of course, I left in 2011, so that’s many, many years ago and he was still young when I left, but I met him a few times and the interest in football and the conversations we’ve had, I think he wants to stay in the game as many of us do. He’s a great, great person and he makes everyone feel good. If you’re 80 or 10, he was my [son] Noah’s favourite player. Not just because of what he did as a player, but the kind of human being he was, in and around the place. So I’m sure, when he becomes a manager, he’ll effect his players. He’s so enthusiastic about the game and he knows the game.

You’ve had success in the FA Cup and it was part of the huge season you had in ’99 in terms of winning the Treble. We saw what happened with Liverpool last night, so the Treble can’t happen for them. With the way people approach the cup, will that Treble ever be seen again?
For me, it was a fantastic final to play in in ’99. It has always been the last game of the season, always been a spectacle, so you can never, ever under-rate the FA Cup and how much it means for the fans, the players, the supporters and the club. For us, yeah, of course, it was a big step towards the Treble, especially the semi-final against Arsenal – that was maybe the turning point. But the Treble was a fantastic achievement I have to say, yeah.

Will it happen again?
We hope we’re going to do it again, but it’s a difficult task and it’s more or less impossible because there are so many good teams around and it has changed domestically. There’s better teams around here now. It was either us or Arsenal in ’99, so that was it. Now there are more of us.

Have you been surprised with how quickly Bruno Fernandes has settled in?
No, I’m not surprised, because I saw what he could do on the pitch and I saw his leadership qualities. We did our due diligence and spoke to people who knew his personality, but you hoped he would have this influence. I’m not surprised, but you couldn’t be 100 per cent sure. Some players, it takes six months, but the point was to get him in, because of the quality he’s got and he’s just relished it. He loves being around the place and he’s given everyone a boost and he’s just come in with that aura about him that we need in players.