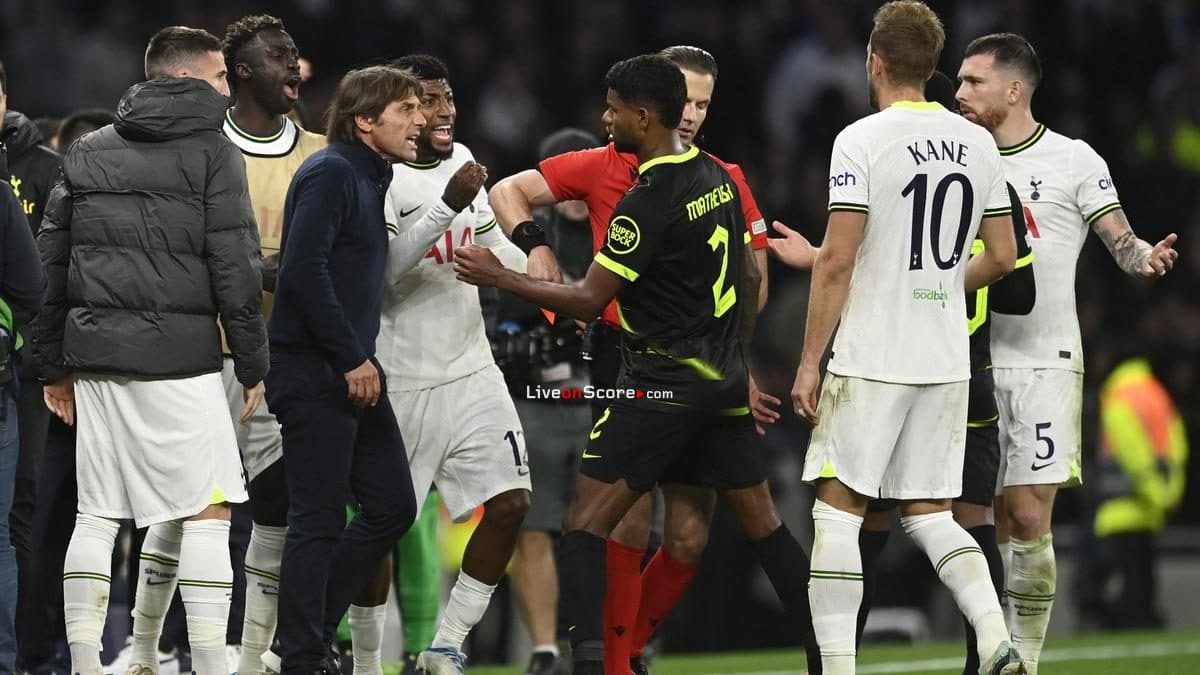 From dancing on the touchline to shouting in despair, Antonio Conte went through an emotionally charged finish to Tottenham’s Champions League game with Sporting Lisbon.

The Italian had been celebrating what he thought was a dramatic injury-time winner by Harry Kane, one that would have sent his side through to the last 16.

But the celebrations were halted as the referee consulted the video assistant referee and, after a lengthy wait, the goal was ruled out for offside.

A furious Conte was sent off as he reacted. Instead of winning 2-1, Spurs drew 1-1.

It could be a huge moment in Tottenham’s Champions League campaign – they must now go to Marseille next week and avoid defeat if they are to progress.

‘A few of us haven’t a clue what happened’

The moment of controversy came in the 95th minute as Kane prodded home after Emerson Royal had headed the ball into his path, via a deflection off a defender.

However, VAR determined that Kane was in an offside position when the ball was played to him and, despite the protestations from several Spurs players, on-field referee Danny Makkelie would not be dissuaded from standing by that decision.

“I think you can see from the celebrations we thought we won it. I don’t really know what happened at the end,” Tottenham defender Matt Doherty to BT Sport.

“I thought because it went backwards and hit a defender it was a different phase of play. I’ll have to look at the rule book. A few of us don’t have a clue what happened.”

As explained by ESPN editor and VAR writer Dale Johnson, the direction a ball is played is irrelevant for offside, with Kane ahead of the ball and the second-to-last defender.

Harry Kane ahead of the ball…. 😬

"The ball went backwards!" Eric Dier said. The direction a ball is played is irrelevant for offside.

The deflection is also not a deliberate play so doesn't reset Kane's offside position. pic.twitter.com/7Pg3GFsK51

‘I don’t see honesty in this situation’
The decision will have been all the more frustrating for Conte given that it came just a few days after Tottenham were on wrong end of another controversial VAR decision.

On Sunday, Spurs’ opponents Newcastle had their opening goal awarded after a lengthy VAR check before going on to win 2-1.

On that occasion, Conte declined to comment about VAR, instead directing a message to the club’s board as he called for money, time and patience to turn Tottenham into a truly competitive side.

But after Wednesday’s game, he could not hold in his feelings on the subject.

‘VAR is dragging out the raw emotion of the game’

Former Blackburn and Chelsea striker Chris Sutton understood Conte’s frustrations, but also felt Tottenham should not have been in a position where they were scrambling for a late winner.

“I get the unhappiness on the decision because the more I look at it, the more it looks onside,” he said on BBC Radio 5 Live.

“But Spurs were so passive in the first half and so way off it. Had they started the game like they played in the second half, this would have been so one-sided.

“It is a big moment because they’ve got to go to Marseille, which is a really hostile place, and get a result. They are under pressure.”

Everton winger Andros Townsend, formerly of Spurs, added on 5 Live: “The bottom line for me, whether it’s offside or onside is irrelevant. I don’t like VAR for this reason, as a football fan, you’re killing the raw emotion of the game.

“Slowly VAR is dragging out the raw emotion of the game we love.”