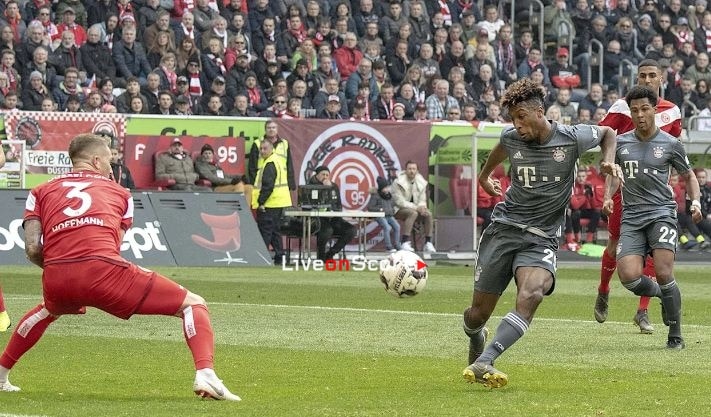 A Düsseldorf defender cleared the ball off the line. Rudi Jobst scored on the rebound to the joy of his FC Bayern team-mates. On 29 December 1957, the men from Munich beat Fortuna Düsseldorf 1-0 in the DFB Cup final at the Rosenau Stadium in Augsburg.

FCB lifted the DFB Cup for the first time, 25 years after winning their first German championship. Since then, there have been 51 meetings between Bayern and the Rhineland outfit. 29 wins for the German record champions compare with twelve defeats and ten draws. FCB are away to Fortuna on Saturday on Bundesliga Matchday 12. fcbayern.com presents the top facts on the game.

Previous meeting
FC Bayern took a decisive step on course for the title with a runaway 4-1 win at Fortuna Düsseldorf. One week after the 5-0 mauling of Borussia Dortmund at home, FCB cemented their position at the top of the table. Kingsley Coman with a brace plus Serge Gnabry and Leon Goretzka fired the Reds to victory in the most recent clash with Düsseldorf.

Biggest win
Seven at one stroke! FC Bayern ran up a 7-0 home win against Fortuna on 6 February 1982. Klaus Augenthaler and Kurt Niedermayer with a double plus Wolfgang Kraus, Paul Breitner and Karl-Heinz Rummenigge secured the biggest win for Bayern against the men from Düsseldorf. It is also the heaviest away defeat for Fortuna in the Bundesliga.

Biggest defeat
Bayern suffered their biggest Bundesliga away defeat to date in December 1978 in Düsseldorf. After being 2-1 down at half-time, FCB were on the wrong end of a 7-1 scoreline at the final whistle. The oddest event: The second half kick-off was delayed due to a faulty sprinkler. FC Bayern struggled on the slippery surface and ended up conceding five goals in the second 45.

Goals guaranteed
FC Bayern have scored 20 goals in the last five Bundesliga games against Fortuna Düsseldorf, netting at least three goals in each meeting. The Reds do not have a similar run against any other Bundesliga club.

Lewandowski’s tiny blemish
Bayern striker Robert Lewandowski has scored against 17 of the 18 current Bundesliga teams. The 31-year-old has only failed to find the back of the net against Fortuna Düsseldorf. However, his current scintiiating form (16 goals in the Bundesliga) gives cause for hope that the Pole will erase the tiny blemish on Saturday. Lewandowski has netted at least one goal in all 11 Bundesliga games this season – a record indeed!

Müller knows the ropes
One of Lewandowski’s team-mates knows all too well how to score against Düsseldorf. Thomas Müller has clocked up five goals in his previous four games against Fortuna.

Danilo: "We have the right mentality to win every game"

TRIPLE BOOST FOR UNITED AHEAD OF BLADES ENCOUNTER