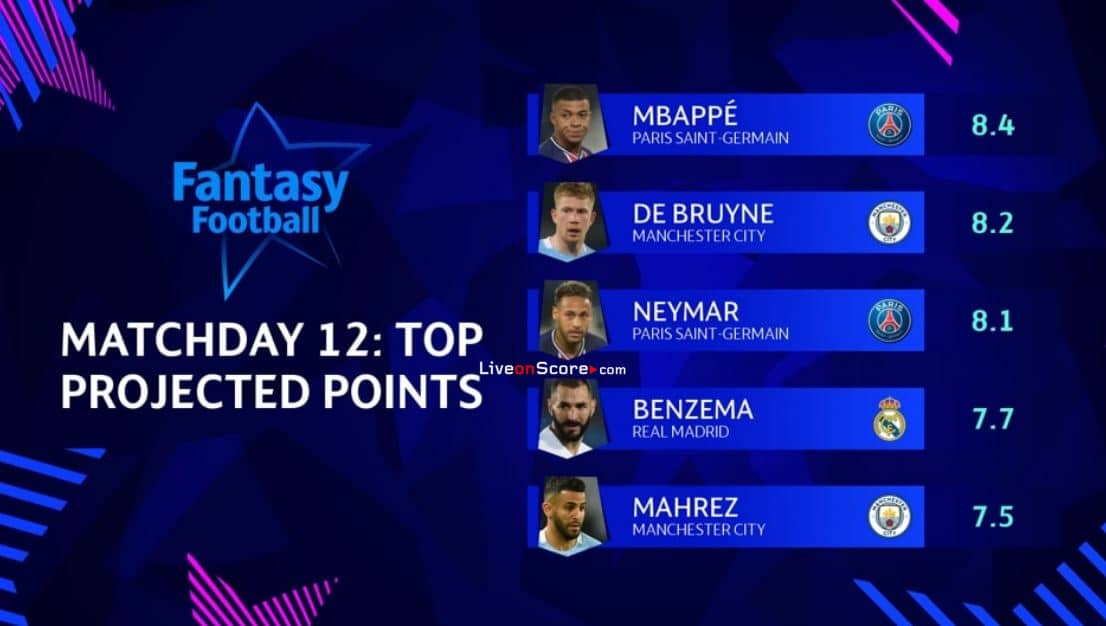 Ahead of Matchday 12, UEFA.com crunches the numbers to find out which players are predicted to perform well.

Predicting which Fantasy players are going to perform on a given matchday is a difficult task. Through crunching the numbers, a projected points total for each player has been calculated based on the player’s historical performance in the UEFA Champions League. Goals, assists, clean sheets and the likelihood of playing are the main parameters used in our projections.

The top projected players for each position for Matchday 12 are given below. As ever, check latest team news and predicted line-ups before making your selection.

The projected scores for the four goalkeepers are naturally lower than usual, mainly because there wasn’t a clean sheet in sight on Matchday 11. The algorithm maintains that Edouard Mendy is the likeliest to put that right on Matchday 12 though, and that is not surprising given that he has recorded seven shut-outs in the UEFA Champions League this season while Chelsea have been incredibly solid at Stamford Bridge in all competitions since Thomas Tuchel took charge.

Both Thibaut Courtois and Ederson outscored Mendy by a single point in the first legs though, courtesy of a save point each, and the Manchester City stopper in particular looks appealing on Matchday 12 as the Premier League side know a clean sheet – of which they have recorded seven in the competition this season – will see them progress.

Karim Benzema was the only striker who found the net last time out as the Frenchman drew level with Raúl González on the list of all-time UEFA Champions League top scorers. Paris pair Kylian Mbappé and Neymar were kept at bay by Manchester City in the first leg but their incredible output throughout the competition – 14 goals and six assists between them – keep them at the top of the projections and owners will be hoping they have better luck on Matchday 12.

Whether or not Thomas Tuchel backs Timo Werner to lead the Chelsea line again remains to be seen but the German will be a differential option if so, while Mauro Icardi represents the ultimate punt. Maurizio Pochettino could well turn to the Argentinian striker if his side are in need of a goal late in the game and his recent strike-rate of six goals in his last four games shows that he could be ready to take that chance.