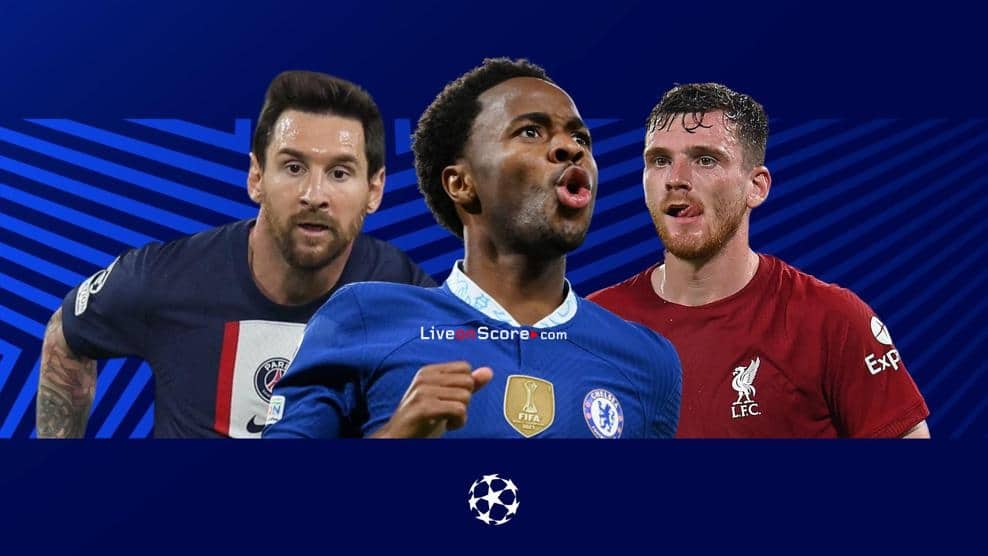 What to look out for on UEFA Champions League Matchday 3

The group stage resumes with Rangers making the short trip to Liverpool, a stiff test for Chelsea’s new manager and a showdown between Group H high-fliers Benfica and Paris.

The UEFA Champions League continues with 16 games spread across Tuesday and Wednesday.

We pick out some key talking points ahead of the third round of fixtures.

What to look out for

There was a sharp intake of breath in many quarters when the group stage draw paired Liverpool and Rangers, with meetings of English and Scottish teams always bringing intrigue. The Reds’ Glaswegian left-back Andrew Robertson may be the focus of attention, having cheekily conceded in the past, “I’ve been brought up as a Celtic fan to not like anything to do with Rangers.”

The sides are meeting for the first time in UEFA club competition, and though footballing logic would seem to favour Jürgen Klopp’s men, Scottish clubs have had reason to enjoy past trips to Anfield. Liverpool beat Celtic (2-0, 1966), Hibernian (3-1, 1975) and Aberdeen (4-0, 1980) in their first UEFA home encounters with teams from north of the border but have not won since (D2 L1), Celtic notably coming away with a 2-0 victory in the 2002/03 UEFA Cup quarter-finals.

“It’s still early days,” insisted forward Raheem Sterling after Chelsea were held to a 1-1 draw by Salzburg on Matchday 2 in their first game under new coach Graham Potter. “He’s getting his ideas across. I think the boys are receiving it well, but it just needs more time to gel.” However, time may not be on their side as they welcome the Italian champions at Stamford Bridge.

With Premier League games cancelled in the wake of the death of Queen Elizabeth II, and then a break for international fixtures, the new manager has had a complicated start at Stamford Bridge, but the statistics already look ominous, English papers pointing out that this is the Blues’ worst start to a Champions League campaign since 1999/2000. Not the best time to welcome the seven-time European champions, but is there ever a good time?

Paris have made a very satisfactory start to their campaign under new boss Christophe Galtier, following up a 2-1 home win against Juventus with a 3-1 success at Maccabi Haifa, but they face a serious test on Wednesday in Lisbon. Indeed, Benfica also have six points, their 2-1 triumph at Juve on Matchday 2 their 12th straight win in all competitions this term. “I saw a very brave team that wanted to go forward,” said proud coach Roger Schmidt afterwards.

Paris’s crown jewels – Kylian Mbappé, Neymar and Lionel Messi – all scored in Israel last time out: a positive sign as they visit a venue which has not always been a lucky one. The French champions have lost all three of their previous away games against Benfica (most recently 2-1 in the 2013/14 group stage), and also played at the Estádio do SL Benfica in the 2021 UEFA Champions League final, losing 1-0 to Bayern.

Further ahead
• All this week’s ties are reversed on Matchday 4, which means a very quick reunion for each of the teams involved. Dinamo Zagreb and Salzburg may be a game to watch, the two sides hoping that AC Milan and Chelsea can take points off each other in the other Group E contest.

• Erling Haaland has a homecoming in the offing when Manchester City visit Borussia Dortmund on Matchday 5. The Norwegian toned down his celebrations after scoring against BVB last time out. Will he need to consider something similar in front of the Yellow Wall?

• The day after Haaland returns to Dortmund, Robert Lewandowski’s Barcelona welcome his old side, Bayern München. The Poland great missed some decent chances on Matchday 2 as his team lost 2-0 in Germany. Will he make up for those lapses at the Camp Nou.