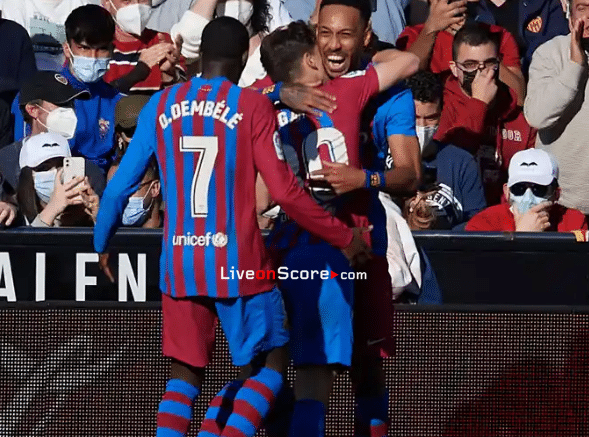 Aubameyang is well off the mark as an FC Barcelona goalscorer. Mestalla was very much the game when he came of age in the blaugrana jersey, scoring three of the four goals in a 4-1 defeat of Valencia.

Aubameyang already knew what it feels like to put balls in the net at Mestalla. Back in 2019, he scored a hat-trick there wearing the red and white of Arsenal. For the side he joined in the winter transfer, it needed just 23 minutes for him to make his impact known, latching onto the end of a delightful Jordi Alba long ball and rifling an unstoppable shot past Mamardashvili.

Barça pushed forward and after Frenkie De Jong has knocked in goal number two. Aubameyang finished off a lovely team move to make it 3-0 and go in at half-time celebrating a brace.

The third was hardly the most beautiful goal of his career. In all fairness, it was really a work of art from Pedri, whose brilliant shot from outside of the area brushed off Auba’s back along the way, doing enough to modify the ball’s trajectory and squeeze it between the goalkeeper and the crossbar.

He thus becomes the first player from Gabon to score in La Liga, and seals his love affair with Mestalla, where he now has six goals in just two visits.