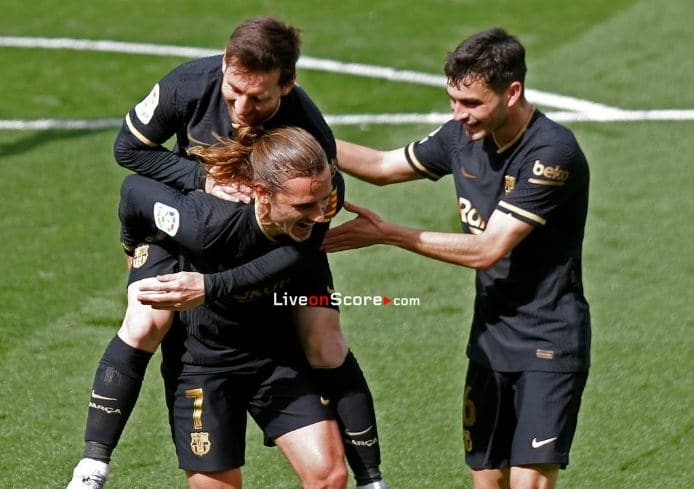 Barça having all of the possession in the opening minutes of the match, it was the hosts who had the first half-chance of any note with Gerard Moreno heading over from a corner. Antoine Griezmann’s goal-bound shot shortly after was cleared by Raul Albiol with keeper, Sergio Asenjo, on the floor, the visitors stepping up the pace in what was quickly becoming an entertaining tussle.

An incredible Barça move on the quarter hour deserved a goal, though an equally brilliant save from Asenjo when Frenkie de Jong seemed certain to score kept the game goalless. The keeper was up to the task two minutes later when Leo Messi rifled a shot goalwards.

Exquisite
The game sprang into life just before the half-hour. Samu Chukwueze handed Villarreal the lead with a great run and finish from Pau Torres’ long ball, before an exquisite chip from Griezmann less than a minute later levelled things up, Óscar Mingueza the provider.

The Frenchman was on hand again to take advantage of Juan Foyth’s underhit back pass on 35, putting Barça ahead for the first time in the match. With a minute to go until the break, only a smart Asenjo save stopped Griezmann from scoring a first-half hat-trick.

Horrendous
Villarreal took the game to Barça in the opening 10 minutes of the second-half. However, Sergi Roberto, playing his 300th game for the club after coming on at half-time, delivered a super assist for Griezmann in the first real chance after the break, the striker just failing to connect properly.

A horrendous challenge from Manu Trigueros on Messi midway through the half saw referee, Carlos del Cerro Grande, produce the red card. Almost immediately, Ilaix Moriba sent a golden chance for a third Barça goal over the bar with Estupiñán working Marc-André ter Stegen at the other end.

Agonising
With 13 to play, Gerard Moreno again went close for the Yellow Submarine, the 10 men looking lively in attack. As the game swung from end to end in the latter stages, De Jong sent his lob over Asenjo but agonisingly wide of the upright.

A flurry of action from both sides kept the entertainment value high, but the scoreline remained the same. Barça now draw level with Real Madrid in the LaLiga table on 71 points, but with a game in hand over Los Blancos.

Mahrez: 'Fans made a massive difference'