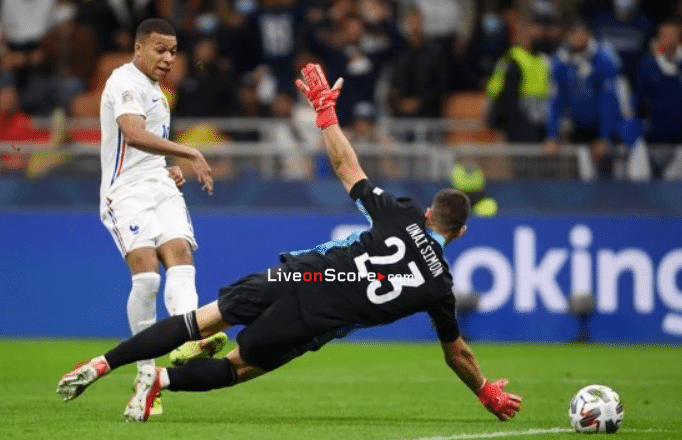 France came from behind to beat Spain 2-1 in the UEFA Nations League final.

The first half was something of a non-event, with both teams cancelling each other out

France rarely threatened, with Spain looking the more likely to make the breakthrough.

Ferran Torres was lively down the right flank and Rodrigo was at his combative best with Serio Busquets in midfield.

Aymeric Laporte – alongside former City team-mate Eric Garcia – was rarely troubled by the sizeable threat of Kylian Mbappe, Antoine Griezmann and Karim Benzema for the first hour or so, with the world champions rarely clicking into gear.

Torres, who scored twice in the victory over Italy in midweek, was very much utilised as a winger by Luis Enrique in this game.

Torres has been the subject of much debate this season as to whether his best position is as a striker or a winger.

Pep Guardiola has compared the City No,.21’s movement to Leicester City’s Jamie Vardy in recent weeks, but he was rarely given the opportunity to threaten from central areas on this occasion.

And when La Roja finally broke through after 65 minutes, it looked like Spain were on the way to victory at the San Siro.

Sergio Busquets clipped a ball into the path of Mikel Oyarzabal who hit a low drive into the bottom right corner to make it 1-0.