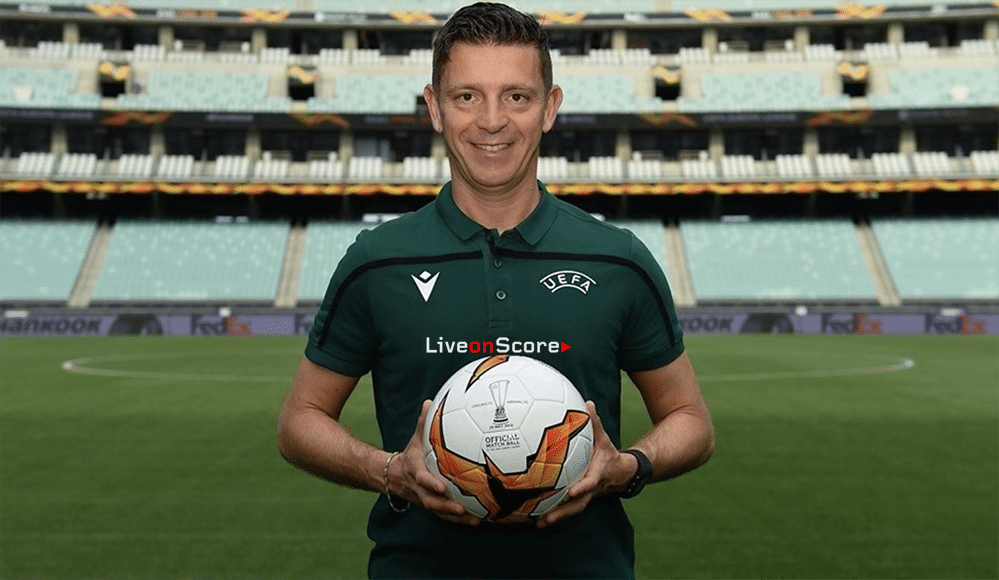 Gianluca Rocchi is ready to savour the occasion as he takes charge of the UEFA Europa League final in Baku.

Gianluca Rocchi is delighted and proud to have been chosen by UEFA’s Referees Committee to take charge of Wednesday’s UEFA Europa League final between Chelsea and Arsenal in Baku – and the Italian is determined to enjoy the moment.

It’s a fantastic appointment for me – it’s a London derby, so it’s a special match, says the 45-year-old father of two, who comes from Florence. I want to make the best of this match. In the line-up before the kick-off, I’ll probably look at the teams, the coaches, the crowd, my referee team-mates, and really fully understand the importance of the occasion.

An international referee since 2008, Rocchi is in the closing stages of a distinguished career during which he has already taken charge of another major European encounter – the 2017 UEFA Super Cup between Manchester United and Real Madrid.

Neither is he a stranger to UEFA Europa League finals – he was fourth official for the 2010 encounter between Atlético Madrid and Fulham, as well as Manchester United’s 2017 encounter against Ajax.

Rocchi began refereeing in 1989. I played football, but realised that I wasn’t going to be the best player ever, so I decided to ‘cross the river’ and become a referee, he says. It’s a decision that I’ve obviously never regretted – I made an excellent choice.

He will be assisted at the final in Baku by compatriots Filippo Meli and Lorenzo Manganelli, with Daniele Orsato taking the role of fourth official.

We’re a good team, Rocchi explains. And without your team, you can’t expect to referee a match to the best of your ability. It’s also very important that you get on as a team – if the relationship is good, and there’s a good atmosphere, this goes a long way towards ensuring that you perform well as a unit on the field.

Rocchi emphasises that management skills go hand in hand with the various technical aspects of refereeing, saying: I believe that there has to be mutual respect between a referee and the players, so you have to be able to communicate with them. Rocchi also feels that refereeing in Italy’s Serie A since 2004 has been crucial in helping him gather the experience and mental strength necessary to handle the biggest international occasions.

It’s vital that you are yourself as a referee, but it’s also valid to look at other referees and take certain things from them to improve yourself, he said. Knowledge of football and its tactics, he feels, is also essential. I don’t think you can referee at the highest levels today if you don’t know something about the game, added Rocchi, who welcomes the opportunities that today’s top referees have to study teams and how they play.

Travelling, spending precious moments with family and friends and going to the cinema with his two sons, aged eight and ten, occupy Rocchi’s time away from the field. Your time can be limited because of refereeing duties, so I really look forward to these moments when they come around, he said.

Rocchi is now approaching the day when it will be time to hang up his whistle and look back on a satisfying refereeing journey. I’m determined to do my best until the very last whistle of my very last game, he said. And that same desire to do my very utmost also applies to the final in Baku.

Where to watch the UEFA Europa League final