English Premier League side Chelsea will reportedly go after AC Milan’s Diego Lopez if goalkeeper Asmir Begovic decides to move to rival squad Everton this summer.
According to Football Italia, the “deal is done” for the 34-year-old Milan keeper, who was “dropped to the bench” last term by then I Rossoneri head coach Siniša Mihajlović in favor of 17-year-old Italian phenom Gianluigi Donnarumma, as soon as Begovic is sold to the Toffees. 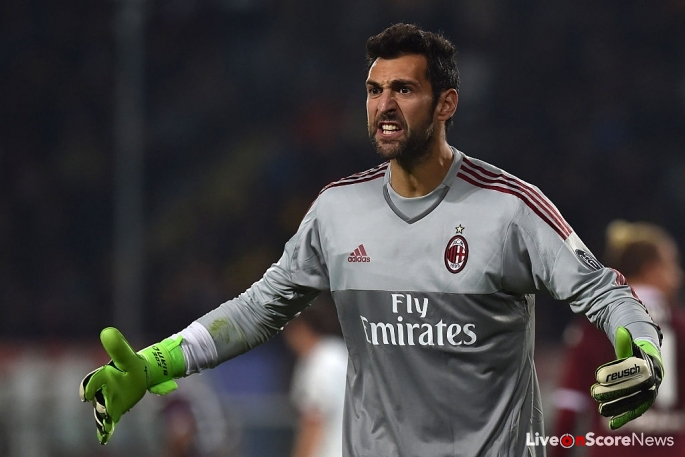 Lopez, who played with Real Madrid for two seasons before joining Milan, had just finished his second season with the Italian Serie A squad. He played a total of 37 games in all competitions during the said time span with 28 of them during his first season in 2014-2015.
The 6-foot-5 Paradela, Spain native began his senior career with Real Madrid’s “B” team back in 2003. He eventually made Los Blancos’ first team during the 2005-2006 season, but his career really took off when he was sold to fellow La Liga club Villarreal in the summer of 2007.
He then spent five seasons with El Submarino Amarillo before he was transferred to Sevilla in May 2012.
Lopez returned to Real in January of 2013 after only eight games with the Sevillistas and spent two more terms at the Bernabéu before settling in Milan in August of the following year.
Former Italy national team coach and current Chelsea manager Antonio Conte is said to be eyeing Lopez as a potential replacement for Begovic, who had been targeted by Everton this summer, as per Caught Offside.
The 29-year-old Bosnian, who was also relegated as a substitute shot-stopper last season to give way to 24-year-old Belgian goalie Thibaut Courtois, is expected to accept the Toffee’s offer, which means Conte’s squad is set to lack in depth entering the new season.
The report noted that “a deal was completed in a meeting last week, with a view of the Spaniard moving to west London after being displaced as the number one choice at the San Siro”.
With Brazilian goalkeeper Gabriel coming back from a loan spell with Napoli and teenage goal tender Alessandro Plizzari set to be promoted to the senior team, there will certainly be no more room for Lopez with Il Diavolo next season and so a transfer is impending.