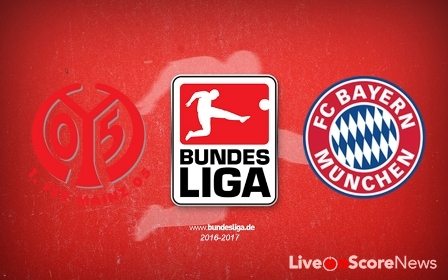 Mainz 05 vs Bayern Munich-Preview and Prediction

The game starts at 2:30 p.m. ET. It can be viewed live online thru FuboTV.
Mainz has been alternating losing and winning in their last six matches to settle at the ninth spot of the current league table.
In their most recent game on Sunday, the O-Fives were nipped by third-running squad Hertha Berlin, 1-2, on the road at the Olympiastadion for their third loss in the last six rounds, as per ESPN.
Head coach Martin Schmidt’s side opened the scoring in the 25th minute of the match with a left-footed shot from striker Aaron Seydel off an assist by Argentine winger Pablo de Blasis.
The capital city squad was able to level the count 11 minutes later with a goal by Bosnian forward Vedad Ibisevic from a cross by Ivorian forward Salomon Kalou.
Mainz then caught a bad break in the 62nd minute when Ivorian midfielder Jean-Philippe Gbamin was booked with a second yellow card and then sent off, putting the visitors on a one-man disadvantage.
La Liga 2016-2017: Atletico Madrid vs Espanyol, Preview, Prediction & Predicted Lineup

Hertha then netted the winning goal five minutes later with a second one from Ibisevic before the team captain was also sent off in the 74th with his own second yellow card booking.
Meanwhile, Bayern Munich defeated Bayer Leverkusen, 2-1, in similar fashion at their home ground of Allianz Arena last Saturday, Goal reported.
Spanish midfielder Thiago broke the game’s deadlock in the 30th minute with a close-range header. Bayer then equalized the match just five minutes later with a left-footed shot from Turkish midfielder Hakan Calhanoglu from a pass by forward Julian Brandt.
Center back Mats Hummels then netted what proved to be the winner in the 56th minute with his own header from the center of the box off an assist by defender Joshua Kimmich following a corner kick.
Prediction and Predicted Lineup

SSC Napoli vs Inter-Preview and Prediction