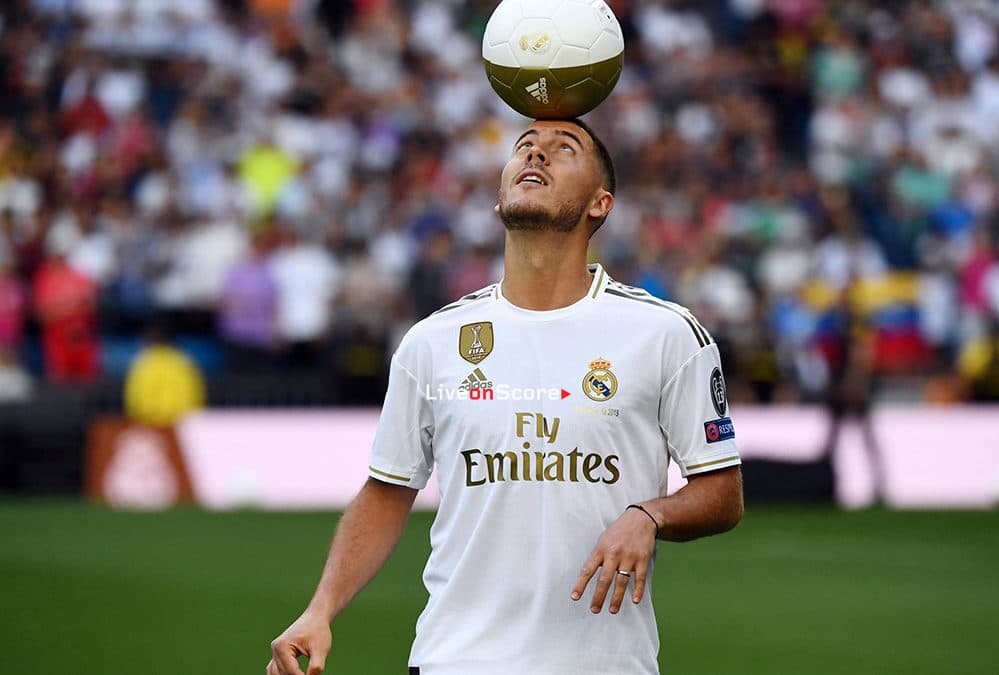 Eden Hazard has been officially unveiled as a Real Madrid signing; here’s why the ex-Chelsea man is a big deal.

Eden Hazard has signed his five-year contract at Real Madrid to formally complete his move from Chelsea. A crowd of 50,000 came to meet the 28-year-old at the Santiago Bernabéu; here’s why.

What they say
When I saw Zidane, he played like his feet were hands. Eden is like that. The ball sticks to his feet. It’s almost impossible to get it off him.
Marc Wilmots, former Belgium coach

You almost hope Eden Hazard gets diarrhoea [ahead of a Man. City game v Chelsea]. You can have as many tactical plans as you want, but if Eden starts running it’s chaos. He’s at a level where he decides how good his team are.
Vincent Kompany, former Man. City and Belgium defender

I think a lot of people, when they see Eden playing, they go: ‘Wow what a player!’
Thorgan Hazard, brother and Dortmund and Belgium midfielder

LOSC
• Brought across the border to sign youth terms at LOSC Lille in 2005 after being scouted playing for local side Tubize, Hazard made his debut as a substitute at Nancy on 24 November 2007, aged 16.

• The man who lured him to France, LOSC academy head Jean-Michel Vandamme, remembered: “When he signed his first contract, he told me he would be in the first team at 16. I thought: ‘He’s crazy,’ but he did it.”

• France’s players’ union made him their young player of the year for 2008/09 – the first foreigner to receive the honour. He became the first back-to-back recipient in 2009/10.

• Zinédine Zidane was a fan early on, saying in 2010: “Eden is skilful and very quick. He will be a major star. I would take him to Real Madrid with my eyes closed.”

• Was France’s players’ union player of the year for 2010/11 as LOSC landed a domestic double, and retained the honour the next season – only Paris’s Pauleta had won it repeatedly before.

Chelsea
• Aged 21, he chose to join Chelsea rather than Manchester United. Was the Blues’ 2013/14 top scorer in the Premier League with 14 goals, manager José Mourinho saying he was “probably the best young player in the world”. He earned the players’ union young player of the season award and came second in the senior vote.

• As Chelsea picked up the 2014/15 championship, Mourinho upgraded him to “one of the top three players in the world”; his peers voted him player of the year. Clinched a second title with the Blues in 2016/17, and a first FA Cup in 2017/18, scoring the only goal (a penalty) in the final against United.

• Made up for missing the 2012/13 UEFA Europa League final through injury by playing a starring role in the Blues’ 2019 decider success against Arsenal, scoring twice in the 4-1 win in Baku. It was his last game in a Chelsea shirt. 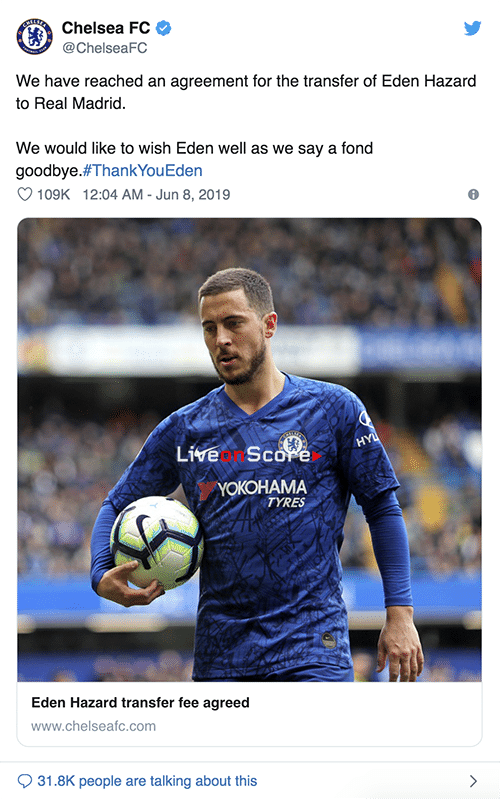 Belgium
• Likened to another La Louviere-born Belgium great, Enzo Scifo, as he came through the Red Devils youth ranks; he made his first senior outing against Luxembourg aged 17 years and 316 days, becoming Belgium’s eighth-youngest debutant.

• Disappointed at being substituted against Turkey on 3 June 2011, Hazard left the stadium and was caught on camera eating a hamburger outside while his team-mates were still playing.

• Helped Belgium to the 2014 FIFA World Cup (their first in 12 years) and made it to the last eight; then – in the absence of the injured Vincent Kompany – skippered the Red Devils as they stalled at the same stage at UEFA EURO 2016. Was captain again at the 2018 World Cup, where Belgium picked up the bronze medal. 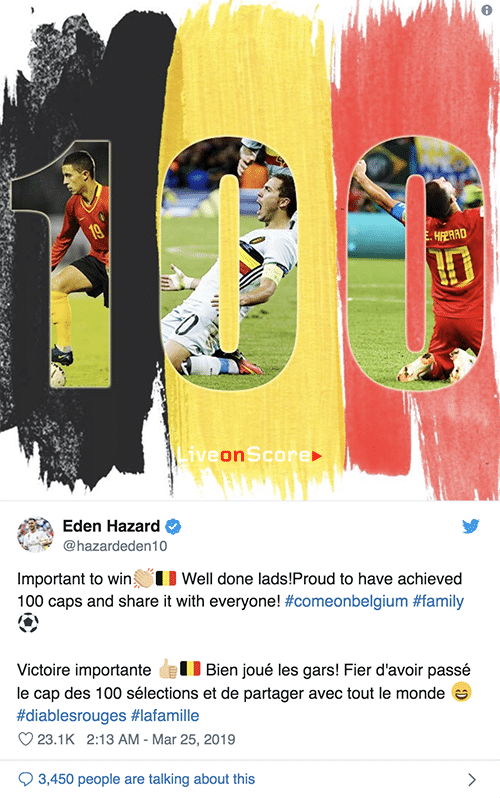 What you might not know
• Hazard was born the same day – 7 January 1991 – as another notable athlete, South African runner Caster Semenya.

• The Hazards are a footballing family; sports teacher parents Thierry (La Louvière) and Carine both played (I was in her stomach when she was playing; she was three months pregnant, Eden said), as do Eden’s younger brothers Thorgan (Dortmund), Kylian (Cercle Brugge) and Ethan (Tubize youth). We could have a great five-a-side team, Eden joked. My dad still plays. My mum could be manager.

• Carine may have been the biggest influence on Eden’s career. I take after my mum as a player, he said. My dad played at the back, chilled out, calm on the ball. My mum was a striker.

• A training pitch near the family home helped the brothers hone their skills. Eden said: It was five metres away, the other side of a little fence. It meant we didn’t mess our own lawn up.

• Cookery helps him relax. There is nothing I like better than going home and cooking my family a nice meal, he said. I have a good repertoire and I can do quite a few different dishes. Sometimes they work, sometimes not. Obviously, we are also well known for beer in Belgium. But I’m a footballer, I don’t drink beer.

• Has been with his wife Natacha Van Honacker – mother of his sons Yannis, Leo and Samy – since he was 14; he scared Chelsea fans in 2014 when he suggested she might persuade him to join Paris, saying: If my wife was to say: ‘Honey, I’d like you to go to PSG,’ I would have to take it into account.

What he says
I really want to start playing with Real Madrid and win a lot of titles. It was my dream since I was little [to play for this club] and now I’m here, I just want to enjoy this moment.

The Champions League is the one thing missing from my career. When I look at the history of the competition and the people that have taken part, the top, top players have all won it. For many, it is why they have been regarded as top players.

I play without fear. I’ve done that since I first kicked a ball in my back garden as a five-year-old, whether it’s been my first game, my 100th game, or my 500th game.

What he might achieve yet
• Belgium’s caps record (112: Jan Vertonghen) might be his one day. Vertonghen and second-ranked Axel Witsel (101) are still playing, but both are older than Hazard, though he may have said goodbye to the goalscoring record, with Romelu Lukaku (still only 26) already on 45.

• Win something big with this highly rated Belgium team. Hazard said: My ambition is to lead Belgium to the World Cup, to win something for the country. They came close in 2018; will they make history at UEFA EURO 2020?