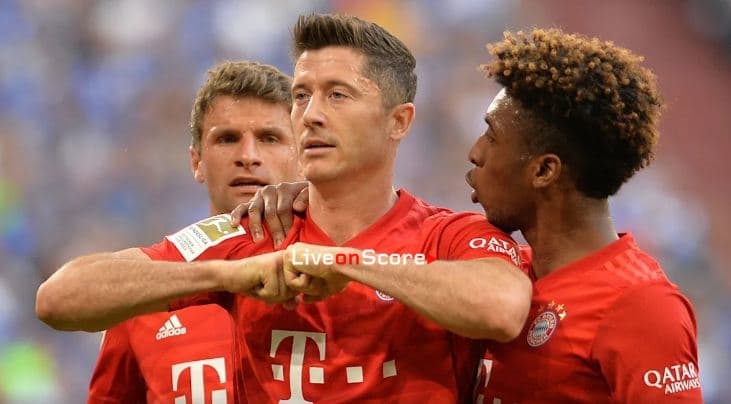 An outstanding performance by Robert Lewandowski ensured FC Bayern won their first Bundesliga match on the road this season, downing FC Schalke 3-0. The Poland captain netted from the spot after 20 minutes, doubled the lead after the restart and rounded off his hat-trick midway through the second half.

The Bavarians started with Manuel Neuer between the sticks and Benjamin Pavard, Niklas Süle, Lucas Hernández and David Alaba in a back four. Thomas Müller, Joshua Kimmich and Corentin Tolisso took up station in midfield, with Serge Gnabry and Kingsley Coman out wide, looking to serve striker Lewandowski.

Lewy from the spot
The 62,271 full house at the Veltins Arena saw the German record champions signal their intent from the off. Lewandowski warmed the gloves of keeper Alexander Nübel from 20 yards before Tolisso tried to set up Gnabry but saw his pass deflected. Stray passing spoiled many of Bayern’s moves at the beginning, although Lewandowski drew a fine save from Nübel.

Bayern took the lead when Jonjoe Kenny upended Coman in the box, Lewandowski proving a cool customer from the penalty spot. Schalke upped the ante now, Neuer beating Amine Harit to the ball, Omar Mascarell miscuing from distance. Müller hit the side-netting at the other end before Neuer comfortably deniesd Harit. Tolisso shone with a fine first touch but fired narrowly wide from ten yards, and match official Marco Fritz blew for half-time.

Second-half dominance
Bayern went straight back onto the front foot after the restart, and Lewandowski doubled their lead with a sumptuous free-kick into the top corner of the net. New signings Philippe Coutinho and Ivan Perišić made their debuts for Bayern, coming on for Müller and Gnabry before the hour mark.

Schalke went looking for a reply, Matija Nastasic directing a header over the bar. Guido Burgstaller drew a save from Neuer, but Bayern soon reasserted their authority. Lewandowski rounded off his hat-trick when he collected a Coman pass, sidestepped a defender and beat Nübel from 15 yards.

Javi Martínez took over from Hernández. Burgstaller rounded Neuer and hit the post, but the linesman had his flag up for offside anyway. Nübel parried an Alaba effort before Tolisso miscued the rebound, and Fritz put the home side out of their misery.

The Bavarians will be back in action tomorrow, when they encounter fan club Vilshofen Rot Weiß in this year’s dream match before entertaining Mainz in the Bundesliga next Saturday.